The 4-year-old Kolya Levashov has been left in a hospital in the town of Voskresensk, Moscow region. A man and a woman entered a first-aid room carrying the boy wrapped in a blanket. 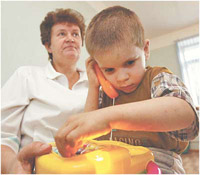 They arrived in a SUV.

A luxury four-wheel drive vehicle pulled up in front of a first-aid room in Voskresensk on a gloomy rainy morning. A man and a woman climbed out of the car. Judging by the clothes they wore, they were pretty well-off. The man was carrying a child wrapped in a blanket. The child looked more dead than alive.

“There’s been an accident. Our son fell from a staircase,” said the man hurriedly. “Help him, please,” added he.

The doctors removed the blanket. The scene made them hold their breath. The child was wearing nothing but a blue jacket and panty hose. His body was covered with bruises and scratches.

“Well, it looks like he had quite a fall,” said one of the doctors. “Do you have a medical insurance policy on the child?” asked the doctor.

“No, we left it at home,” answered the woman. The words came out as gasps. Yet the doctors could feel a dash of relief in the way she spoke those words. “We’ll be back in a minute,” said she and the couple walked out of the emergency room.

They never came back.

“What kind of people are they? They look like they’ve got means. And they just abandoned the poor child. The boy was in dire straits. He really had one foot in the grave,” say the doctors.

The child had to undergo intensive therapy for several months in a regional hospital. The boy slowly recovered from a grave injury on his cranium. The child had also suffered from malnutrition.

Kolya was diagnosed with blindness when he finally came around.

“Kolya was born blind. He has a congenital atrophy of the eye nerves,” sighs Irina Dyatlova, head of department at the hospital. “It’s a crying shame. The blind boy, a completely helpless creature, has been beaten up and subjected to starvation,” adds she.

All the doctors working in the department are enamored with the boy. They can hardly fight back the tears as they look into his eyes open wide, the eyes that have never seen the light of the day.

Somebody called the hospital a week after the boy was admitted to the intensive care. A female caller asked the receptionist how Kolya was doing. She hung up after being told that the child was alive. The doctors did not tell Kolya anything about the strange call.

Kolya would wake up sobbing from yet another nightmare “Momma, give me some bread please,” he moaned.

“Good gracious!” say the doctors in dismay. “The poor child just couldn’t get his fill at the beginning. And his parents looked like wealthy people. The boy never complains, he can behave himself alright. He’s a smart one, too. He can always find the right door in a corridor,” say the doctors.

“He can recognize me by my manner of stepping. You know, sometimes I feel pretty surly at the end of the shift. And here comes Kolya. He will place his tiny hand on my knee, running it gently up and down. ‘Are you tired? You’ve got a headache, don’t you?’ he’ll ask me in his sweet voice. And I’ll feel better in a split second,” says one of the nurses.

A dark-haired boy walks along the long corridor. After a brief pause, he grabs a knob of the nearest door and pulls it open.

“Kolya, how can you locate the door to your ward?”

“I just keep walking until I reach the right one,” answers the boy. “And here’s Katya, my girlfriend,” adds he and motions to a girl standing nearby.

Kolya Levashov cherishes a dream. He wants his mother to come back.

“He used to be talking about his mom who would surely call the hospital, and his dad who would come to pick him up, riding on a big car. But we doubt that those two who’d brought him to our hospital are his real parents,” says Irina Dyatlova.

Kolya will be 5 years old on September 27th.

“What would you like to get for your birthday?”

“I’d like to have a chocolate bar. And I want to have my momma back,” says the boy.

He takes a toy phone set, a wispy hand holding the receiver tight: “Hello! Momma, can you hear me?”