Son hangs himself in front of his paralyzed mother

Zinaida Selyukova took the death of her eldest son very badly. Despite all her efforts to help him recover from a serious heart disease, she was unable to save him. The grief she suffered left its traces: after her first heart attack, Zinaida managed to recover, but after the second she was left paralyzed. 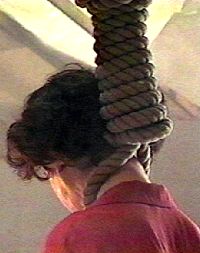 Son hangs himself in front of his paralyzed mother

The unfortunate mother’s younger son Sergei became her support. The young man was in fact her carer: he would prepare her food, wash her, bathe her and change her clothes. But he was not able to get together enough money for her to be treated and properly looked after. His mother’s suffering and helplessness drove Sergei to madness.

“A difficult life frequently drives people to suicide,” says police officer Denis Cherednichenko. “People can’t see a way out and don’t see any sense in living further. Probably Sergei Selyukov could not cope with all the ordeals that he had been faced with.”

On the morning of that fateful day, neighbors saw Sergei going to the pharmacy. A few hours later, some friends who had come to visit his mother were unable to enter the flat. When the door still did not open in the evening, the women became concerned, informs Stavropolsky Meridian.

According to an officer from the commissioner’s police department for the Predgornovy region, Denis Cherednichenko, the duty section of the police department began to receive one call after another from the village of Nezhinsky . The inhabitants informed us that at house number 22, a man had committed suicide before the eyes of his paralyzed mother and that his body was now lying next to hers.

“When we arrived,” remembers the policeman, “we found an old lady lying on the sofa in the room; she could not speak or move. A few meters away from her, by the door leading to the bathroom, I saw her son’s corpse. He was in a sitting position (with his knees on the floor), one end of the insulation wire was fixed to the door-handle and the other was wound round his neck.”

Sergei’s death was not instantaneous. His unfortunate mother was left helplessly watching the torment of her dying son, after which she spent almost another full day looking at her child’s cooling body. When doctors arrived, Zinaida was in a critical condition. The doctors were shocked at the sight of the woman’s blue and swollen arm.

“Probably Zina tried to call for help, or at least somehow stop her son,’ says her neighbor, Antonina Pomogaytis. “Evidently she had been beating the wall with all her strength. But we weren’t home and heard nothing.”

“It turned out that the woman had, in fact, broken her shoulder,” informed the doctor on duty at the reception of Kislovod city hospital Genadii Popkov. “I can honestly say that we doctors are used to all sorts of things. But what this woman has had to deal with really shocked us. All the ordinary problems a person could have put together could not compare with the moral torture that Zinaida Selyukova has been through.”

A few days after the tragedy, a distant relative from the village took Zinaida under her care. It was impossible to leave the unfortunate woman in house where this whole nightmare had taken place.