Cleto Ruis Dias, the 44-year-old Argentinean, is begging to undergo sterilization. Mr. Dias has begot 37 children. He is no longer capable of memorizing the names or dates of birth of his numerous offspring. Meanwhile, the issue of sterilization is a very sensitive subject for many lawmakers. 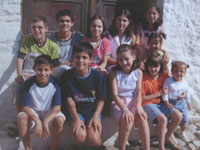 Cleto Ruis Dias said to himself that enough was enough after his latest child was born with a harelip. He filed a request for sterilization to the Argentinean authorities.

The father of many children lives in the town of Santa Lucia , in northern Argentina . The region is considered one of the poorest parts of the country. Sterilization is against the law in the region. The Senate of Argentina seems to be the last hope of Mr. Dias. The Senate is currently considering lifting the ban on sterilization.

Mr. Dias reached his puberty when he turned 9. He is 44 years old now. For the last 14 years he has been living with three women simultaneously. His present-day partner bore him 7 children. These days Mr. Dias is no longer capable of memorizing the names of his offspring, not to mention the dates of birth.

The super daddy admits that he has never used condoms in his life. He says he has no money for buying contraceptives because he has a large family to support. According to Mr. Dias, he makes only 1.5 Euro a day by painting walls.

“It’s hard to stuff too many hungry mouths with food every day,” Mr. Dias was quoted as saying by Spiegel Online.

On the whole, the issue of sterilization has been a stumbling block for lawmakers. Switzerland was the first country in Europe to rule on the issue back in 1928. The Scandinavian countries followed suit in the 1930s.

First and foremost, the lawmakers aimed to deal with medical problems. In particular, they ostensibly took steps to prevent the spread of dangerous hereditary diseases.

Some of the present-day politicians have taken a more radical stance on the issue. For example, the deputy of the Belarusian Parliament Sergei Kostyan spoke about the compulsory sterilization of those who “lead a disgusting sex life.”

“We should tackle the problem in a radical way. We need to enact a law on compulsory sterilization now, otherwise the state will break down. The state will be unable to support the mentally and physically deficient children, the same applies to the orphans,” said the above deputy at one of the sessions of the Belarusian Parliament, Interfax reports.