Russia's Kostya Tszyu surrenders once and for good 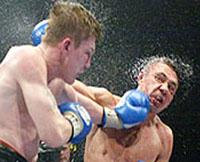 Russian boxer Konstantin Tszyu suffered a debacle on Sunday overnight in Manchester, UK. Tszyu lost his title of the world champion in the light welterweight division on IBF version. The Russian boxer refused to continue the fight with his rival, Ricky Hatton, in the 12th round of the tournament held at the MEN Arena.

One may notice the ongoing trend when legendary stars of boxing leave the sport one after another: Lennox Lewis, Oscar De La Hoya, Roy Jones, Felix Trinidad. The 35-year-old Konstantin Tszyu was rumored to join these world-known boxers before the fight with Hatton started. Tszyu can be described as an athlete of declining years from the point of view of professional boxing – Hatton is only 26 years old. However, Kostya proved during his previous fight with US fighter, Sharmba Mitchell, that he was still a mature master of boxing on the right, despite a series of traumas and operation that he had to experience. “I am becoming only better as years go by, I am like wine. My age is by advantage, not a flaw,” Kostya said.

Kostya was absolutely sure of himself when he succumbed to the pressure of his promoter, Frank Warren, and agreed to stand up against Ricky Hatton at 2 a.m. at Manchester Evening News Arena. The fee has definitely played quite an important role in the decision-making process – Kostya was fighting for two million pounds sterling. The Russian boxer vehemently denied his defeat in Ricky Hatton's fatherland, at a stadium all packed by cheering English fans. “I have already had such an experience, when I was fighting with Julio Cesar Chavez in front of 15,000 Mexican fans. They all hated me,” Kostya recollected his victory, which he accomplished five years ago. “I have learnt to disregard such factors and concentrate on my own work only. As far as a night fight is concerned, the time difference obviously has its influence on it,” he added.

The Russian boxer obviously had some difficulties in the fight with Ricky Hatton, who is reputed to be one of the most popular English athletes. It was the first time in Tszyu's professional career when he was fighting in Europe.

Kostya Tszyu was the first man to congratulate the new IBF champion. “I have nothing to be ashamed of. Hatton was stronger today. I realized during the 11th round that I would not be able to win. I have never been that much exhausted on the ring before. However, my career is not over. My fans will probably see me on the ring again,” the former world champion said.