Last Friday a city court in Khimky, Moscow region, ruled that Coca-Cola should pay 3,133 rubles ($110) in damages to Natalya Kashuba. Kashuba filed a lawsuit for damages against Coca-Cola. The plaintiff maintained the company had failed to provide her with complete consumer information regarding usage instructions and potential health risks for a product. Therefore, the company has allegedly broken the Russian law “On the protection of consumers’ rights.” 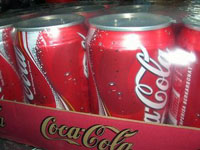 The hearings in the case began last November. Natalya Kashuba’s lawsuit says the plaintiff developed a health problem due to cola. She began suffering from stomach pain and heartburn. In a hospital she diagnosed a disease with which the use of carbonated soft drinks is not recommended. The doctors told her that she had a non-erosive kind of gastro-esophageal reflux condition. According to medical statistics, at least one fourth of the Russians have heartburn – one of the major signs of the above condition.

Natalya Kashuba estimated the cost of her medical bills and moral damages at 5,133 rubles ($185). Though the court eventually reduced the amount of damages by 2 thousand rubles, Coca-Cola representatives expressed their dissatisfaction about the court decision and said Coca-Cola would appeal.

According to Dmitry Yasin, chairman of the International Confederation of Consumers’ Societies, at times Russian nationals are awarded damages on lawsuits filed against large Russian companies with turnover totaling billions of dollars. However, the situation is different as to damages claimed from transnational corporations. The Russians seem to be reluctant to file lawsuits against foreign companies. The case of Olga Kuznetsova is probably the only example that remains in the spotlight to some extent. Kuznetsova claims 900 thousand rubles in damages from McDonald’s for injuries sustained in one of the restaurants. Kuznetsova spilled hot coffee on her body after a tray with food and drinks got knocked off her hands by closing doors.

“Transnational companies are trying to play by the book. A small number of lawsuits for damages against them can be partly explained by that factor,” says Yasin, in an interview to Gazeta. “The final decision in the case of Natalya Kashuba is yet to be made. You know, it’s pretty difficult to list all possible counter-indications on a product’s packing. In their turn, consumers should pay more attention to their own health,” adds Yasin.

Dmitry Yasin believes the problem stems from certain flaws in the Russian law. “By comparison with U.S. and European packing materials, the Russian-made packing looks rather miserable in terms of design and consumer information. For example, the Russian law does not say that Coca-Cola or Wimm-Bill-Dann must indicate the sugar content on packing, which only has information with regard to carbohydrates. As a result, there’s no way a person with metabolism problem can learn how much sugar he will consume by drinking a bottle of juice or cola.”