Tatyana Lyapina had to deliver her baby boy on her own while lying on the floor in a maternity hospital. She had no help from the doctors. Instead, the doctors told off the poor woman for smearing the floor with her blood during the labor. Besides, the doctors plainly refused to take care of the newborn baby. They said the baby was dying anyway. 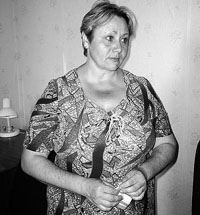 Tayana is still in a state of shock. She still shudders as she recalls her experience in a gynecological ward of a regional hospital in the city of Orenburg, on the Ural River. Tatyana, a medical professional herself, had never imagined that the cruelty of her colleagues would result in the death of her long-awaited son.

Tatyana was rather glad to learn about her last pregnancy. Her two daughters have already become teenagers. Her husband and Tatyana had been dreaming of a son for a long while. Despite her long record of diseases and more than a mature age (she is in her forties), the woman decided to bear a child. She did not have any complications during the course of her pregnancy. But a gynecologist at her local prenatal care clinic opted to be on the safe side and sent her off to a regional hospital for ultrasound scanning.

The doctor at a maternity ward apparently did not like what he had seen during the examination. “Looks like you may have labor soon. Now we need to make a decision whether you’re going to carry a child or not.” The doctor sounded very commandingly as if he was giving orders to Tatyana. She just couldn’t believe the doctors would decide on such an important issue without taking her own opinion into consideration.

Then the doctors put Tatyana on a drip, no reasons given. The woman felt dizzy shortly afterwards. A bit later she felt her amniotic fluid being released to the exterior. Tatyana asked a nurse what was going on. “You’re going to have a baby soon!” answered the nurse and giggled. Tatyana never thought that it could happen so fast.

Yet her sufferings had just begun. She was told to go and take an ECG shortly after her contractions started. Tatyana had to go staggering on her own to the other building of the hospital where an electrocardiograph was located. The woman was actually in the middle of labor yet the doctors did not assign an orderly to help her out during the walk. The woman took an ECG. She was on her way back when the contractions became more intense. As a result, Tatayna had to give birth to a baby boy as she was lying on the floor, several meters away from her ward.

According to Tatyana, the newborn weighted about a kilo. Tataya’s pregnancy lasted for nearly six months. “A doctor was passing past me as I lay on the floor. He took me by the hand and tried to pull me across. I went like: ‘What are you doing? Can’t you see I’m having labor?!’ And that doctor gave me a wry smile and scolded me for all those blood stains on the floor. And then he just walked away,” says Tatyana.

In desperation Tatyana carried the baby to an examination room. The baby was still breathing. Tatyana was begging the doctors to examine the newborn. Yet the doctors just brushed aside her request. They said the baby was dying. They refused to give it a try and resuscitate the newborn. Tatyana vaguely remembers the event that followed. They still seem to be part of some terrible nightmare to her. No medications could ease away her pain from the trauma. Tatyana kept crying all the time. She refused to talk to the doctors who regarded her newborn son as just another fetus that did not make it.

According to an article published by local newspaper Yaik, deputy chief doctor of the regional hospital No 2, chief obstetrician Lybov Selina has a different version of the story. Selina claims Lyalina was suffering from hypertension, and therefore her amniotic fluid was released before the patient was examined in a gynecological chair. The patient was left all alone due to a severe lack of doctors and nurses in a gynecological department, which has five wards. A nurse on duty was probably busy at the moment giving help to some other patient, said Selina.

Vladimir Kshnyasev, head doctor at the gynecological department, denies any allegations about childbirth on the floor in his department. “Yes, it’s true that we have no maternity room or midwife. I was wheeling off Lyalina myself after she suffered a miscarriage. Lyalina stayed in our hospital for a week. She received the complete course of prenatal treatment. The child could not survive under the circumstances. His mother’s health is too poor. Besides, a fetus at this stage of pregnancy isn’t viable at all. The fetus in her case weighted just 450 grams,” says Kshnyasev.