The Moscow authorities plan to close all street stalls selling fast food and allow functioning only of those booths that sell flowers, newspapers, ice-cream and information booths. 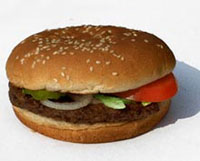 Head of Moscow’s Consumer Market and Services Department Vladimir Malyshkov says that a program for fast food booths liquidation has been already developed and is supposed to be realized within three years. At that, First Vice-Mayor of Moscow Vladimir Resin insists that selling of fast food must be stopped by the end of the current year.

Governmental officials say that the measure will make the Russian capital look better. They explain that street stalls selling food must be closed for the sake of consumers’ sanitary safety.

The municipal authorities plan to offer 2.3 million of square meters of new stores they plan to build especially for fast food trading. Do Moscow authorities actually think that booths selling hot-dogs considerably mar the look of the Russian capital? Majority of European cities have fast food booths in the streets that make no problems for tourists while enjoying historical monuments and modern buildings. It is true that the sanitary condition of Moscow fast food booths leaves much to be desired and certainly some measures must be taken to guarantee clean and safe food to consumers.

Or do authorities believe that Muscovites need no fast food at all because of their particular mentality? Psychologist studying food problems Maria Ossipova says that the bigger a city the less its citizens follow the traditional nutrition pattern typical of this particular country.

Nutritional traditions of the world are various and they contradict each other. So, it is not right to say that some particular pattern is right and others are wrong. However, fast food is typical of any megapolis where citizens live a rapid life. At that, sociologists state that fast food is gaining more popularity in smaller towns as well.

What are the people who love hot dogs and other things offered by fast food stalls in the street? It turned out that people love fast food irrespective of their social status. Maria Ossipova says that people’s love for fast food is connected with their low self-appraisal. “Time devoted to meals is the time we devote to ourselves. It is an important part of self-respect that demonstrates how we treat our life and our personality. And that is why traditional nutrition systems focus on the process of cooking meals, and having meals is an important ritual,” the expert says. In other words, people who eat fast food care little about themselves. And experts also state that those who eat fast food often suffer from loneliness even when they have families and friends.

Majority of our contemporaries suffer from loneliness which is a serious psychological problem today. When faced with the problem of loneliness, megapolis citizens begin to suppress it with hot dogs.

But it is not surprising at all that some people eat fast food just because they actually love the taste. Fast food makers know how to attract more consumers. Sauces served together with fast food always contain taste intensifiers, natrium gluconate for example. And people easily get used to these artificial tastes and eat too much hot dogs at once. Psychologists inform that the number of people loving fast food is gradually increasing. At that, the number of people sticking to rational and healthy food patterns is invariably stable and makes up 1-2 per cent of Muscovites.

The public catering industry does its best to satisfy the likes of any category of citizens and offers not only hot dogs and pies but also pancakes, baked potato with different salads. In a couple of years fast food will not be that available in Moscow. The authorities want fast food stalls to move to large commercial centers and shopping malls. They explain that today fast food stalls badly violate sanitary norms; fast food makers sometimes disregard the technologies of making this or that food and have no pure water.

Epidemiologists are sure that the number of salmonellosis patients increased by 18 percent in spring because of sanitary norms violation. The number of patients suffering from enteric infections doubled. And this is also an important problem together with the low self-appraisal and loneliness of megapolis citizens.