Historical chronicles dating back to the ancient civilizations of Greece, Egypt, and Roman Empire contain references to strange signs appearing in the sky. Those signs were either hanging motionlessly or moving over the area. Some of those signs looked like letters and numbers. Gaius Julius Caesar was reported to have seen a good omen in the sky several days prior to confronting the enemy on a battleground. Caesar won that battle. 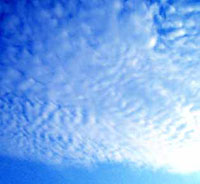 A number of paintings and etchings in the Middle Ages feature the phenomena e.g. the “omen” seen over the city of Nuremberg on April 14, 1561.

The Danish national flag, otherwise known as Dannebrogh, is probably one of the oldest flags in the world. According to a legend, the history of the flag begins in the time of Waldemar II The Victor who led the Danish crusaders against the Estonians. On St. Vitus’ Day, June 15, 1219, the Danes were taken aback by a frantic assault of the Estonians who launched an all-out offensive, with hordes of bloodthirsty warriors rolling over the defenses. All of a sudden, a huge blood red flag with a white cross fell out of the sky like a heavenly omen. The retreating Danisn soldiers picked up the flag, regrouped and struck back. They defeated the Estonians, shouting at the top of their lungs: “We are winning under the sign of the cross!” However, there is no solid evidence showing that Dannebrogh originated at the time. The Wapenboek Gelre of the late 14th century has the first graphic representation of it. Perhaps Dannebrogh was originally used as a flag in the 12th century crusades.

The “heavenly messages” were also witnessed by the persons living in the 20th centuries. Below is an eyewitness account by Konstantin Tsialkovsky, the Russian inventor and rocket expert:

“The following event happened on May 31, 1928, at about 8 p.m. After reading for several hours, I stepped into a balcony for a breather. My balcony faces the northwest. It has the glass walls and a cover. I would normally stare at the sunset. The sun was still up on that day. The sky looked mostly overcast, with no sunshine breaking through the clouds. Suddenly I spotted three easily readable letters of the Russian alphabet “Ч А У” hanging on the horizon. It was obvious that the letters had been made of the clouds located at a distance of 20 or 30 kilometers. I was quite amazed at the clear shape of the letters. A minute later I went back into my room for a scrapbook and a pencil so that I could put down the phenomenon. An interesting idea crossed my mind while I was thinking over the possible meaning of the message in the sky. I imaged it being written in Latin, not in Russian. Then the letters would have made up the Russian word “РАЙ”. Well, the message would have made some sense in that case. The word looked somewhat hackneyed but there was nothing I could do about it. Later on I seemed to have understood the meaning more completely. In fact, it confirmed things I postulated in The Monism of the Universe. Basically, the theory holds that all our sufferings should stop when we die. Using a rather pompous way of speaking, the heavens confirmed my suppositions. The message was made of clouds. But what force made them take that particular shape, which conveyed a certain meaning appropriate to the occasion? I’m 70 years old, and I’ve never had a single hallucination in my life. I never touched wine or any other stimulants. “ЧАУ” in English could stand for a “beam of light” in Russian. Could the meaning relate to some “light of knowledge” one should receive after his demise? The guess looks a little far-fetched, though.”

The year 2001 was a unique year in terms of omens that were seen in the sky in different parts of the Soviet Union. A large number of signs, figures and mathematical symbols were observed over the different locations during that period. The sky reportedly looked like a blackboard used by a giant for writing a variety of cryptic messages. Perhaps those messages were meant to portend the collapse of the Soviet Union that began the following year.

On June 20, 1990 , at abut 7.30 p.m., E. Chudina, a resident of the city of Odessa , looked out the window and saw a big gray egg-shaped cloud splitting in two. The figure of a woman seated on a chair appeared between the freshly formed clouds. The woman had a crown on her head. And she was wearing a long golden [sic] dress. The “show” lasted for 15 minutes.

According to a report published by the regional newspaper Sovetskaya Moldova, the passengers of a shuttle bus bound for the village of Rybitsa saw a similar picture gracing the sky on a warm October afternoon of 1990. A dozen people could see something huge and orange stretch across the sky. It was shaped like a woman’s body. The woman seemed to be reclining on a chair. Her hair streamed down to her slim waist. Her prominent breasts and shapely legs were wrapped in a flimsy fabric. The passengers gaped at the vision for half an hour. Then it faded away leaving a yellowish smear in the sky.

The above stories might as well be made up by some journalists who aim to sell a sensational story. However, thousands of soldiers on either side of the German-Russian frontlines saw a giant female figure hanging in the sky in the fall of 1914. Before long the rumors started circulating among the soldiers. One of the rumors said the phenomenon had been an apparition of the Blessed Virgin, an omen of victory. The question is: Did it portend the victory of the Germans of the Russians? The Soviet-era scientific journals “explained” the case in a typical manner: “The Blessed Mary” was a fine specimen produced by a powerful projector.