11-year-old Moscow girl is with child, her inamorato is twice her age

The boyfriend said he was 14. Why did he hide his true age?

Eleven-year-old Muscovite, Valya Isayeva, has recently caused a sensation when she got pregnant. Now the girl is 11. Her pregnancy is 30 weeks old. She is practically ready to give birth to a child. Normally, pregnancy lasts for 38 to 40 weeks, though a preterm birth seems very likely in the above case due to the age of the mother. 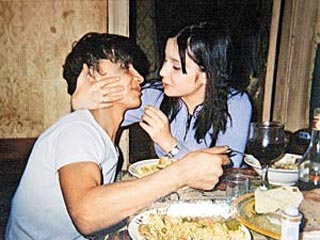 Valya is an orphan. Her mom left her when the girl was just one year old. Her dad died when she turned 8. The dad never saw her daughter because he was doing time at the time. Antonina, her grandmother, was bringing up the girl. Antonina is a stocky loud-voiced woman. She is a saleswoman in a greengrocery.

Uzbek immigrants opened a pita shop next to the greengrocery. “Vladik”, an Uzbek, was a loader at the pita shop. Valya met “Vladik” at her grandma's store three years ago. Valya says it was “love at first sight.” Now she is 11 and heavily pregnant.

Her grandma keeps saying that she had no idea what was going on. “Well, the guy stayed up real late a couple of times, so I let him spend the night at our apartment, but he slept in her bed,” says she.

Valya looks pretty much confused. She just says that she loves “Vladik” very much and looks forward to having a baby. “Vladik” appears more scared than happy about his fatherhood. Anyway, he says he will not leave Valya.

Journalists still had their doubts about an idyllic picture painted by the leading characters.

The grandma said to me that Vladik's real name was Bakhtier. She did not want me to publish that information because the boy's parents in Astrakhan knew nothing. She even demanded that I scratch the name off my notebook. She seemed to be very much concerned about possible consequences.

As it turned out, the boy's parents have nothing to do with her worries. The boy's dad and mom do not read Russian newspapers. Because they live in Dushanbe, Tajikistan. The grandma was just covering up the tracks. She made up a story about Bakhtier from Astrakhan to hide the boy's real name and other personal data.

The guy's real name is Khabibula. He is 22 years old. He and his elder arrived in Moscow from Dushanbe. The Russian immigrant authorities sent him back to Uzbekistan a year ago. But he came back.

He looked very tense and nervous talking to the journalist. He did not want to be photographed. The grandma was nervous too. She was particularly sensitive about any additional information on “Vladik” that might be made public.

Well, her worries can be perfectly understood. She does not want to draw attention of those who know Khabibula. Like those who attended his 21-year birthday party last year. They may call up the newspaper and tell the journalists that the boy is not 14, he is 22. As a result, he might as well be prosecuted for seducing an underage girl.

Khabibila holds a birth certificate of his 14-year-old younger brother who lives in Dushanbe. “Romeo” apparently showed the document to the police department for juvenile delinquencies when they began asking him questions about his relationship with Valya. Besides, he is a pretty short fellow and does not look his age. His elder 25-year-old brother also has a boyish appearance. By the bye, the elder brother is in custody at the moment awaiting trial for armed robbery.

There was an obvious clash between the stories about Vladik appearing in Valya's house for the first time. Speaking to the school authorities, the grandma said that “Vladik” and his father had rented a room in her apartment. She told the journalists that Vladik had been simply calling on Valya.

Judging by the bits and pieces put together by the journalists, the story looks pretty grim. The guy was reportedly living for a year in the Isayevs' apartment. The grandma let him sleep in Valya's bed. Medical examinations seemed to confirm that girl had been involved in a sexual relationship for some time. Therefore, rumors started to circulate through the Center of Family Planning about the 11-year-old girl doing it for money.

Valya was not an underage streetwalker, no doubts about it. Still, the story seems to boil down to money. The grandma was more than happy to get hold of the guy's wages. Khabibula could not tell me exactly how much he was making when I asked him about his compensation. He told me vaguely that he was making as much as the grandma. Maybe his wages went straight to the grandma? Looks like the grandma became friendly with the guy because of his money. That is why she did not mind him sleeping with her granddaughter. Or a life of hardship forced her to seek help of an Uzbek immigrant. She may have thought that the relationship between Khabibula and Valya was OK as long as her granddaughter liked him. The end result was nobody's care. I wonder if “Vladik” is going to use his younger brother's birth certificate should he tie the knot this time.