One year ago, Svetlana Izambaeva from the city of Cheboksary received the title of beauty queen in a special competition for HIV positive girls, Miss Positive. Unafraid to talk about her illness before the whole country, this girl has fundamentally changed her own life: a Russian TV channel has offered her work as part of the AIDS – First Aid project and in mid-June. 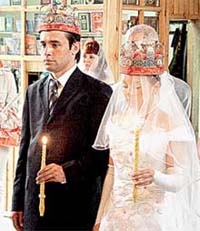 The judge for the Miss Positive competition was 29-year-old designer Ilya Mukxametanov, whom Sveta met during the competition. He is also HIV positive.

“From my side it was love at first sight, it is impossible not to notice Svetlana!” insists Ilya. “She has so much energy that her friends call her dynamo-machine!" exclaimed he.

“To tell you the truth, I never expected that a simple acquaintance would result in a wedding,” Svetlana continues. “But now you won’t find a happier person than me!”

The couple celebrated the wedding in Ilya’s home city, Kazan, but the ceremony was held in Mikhail Arkhangel’s small church in Cheboksary. Svetlana and Ilya will spend their honeymoon in Sochi (on Russia's Black Sea coast) and, on their return, they will begin working for TV, for which they have many plans.

“I want the attitude to HIV infected people in our society to change,” says Sveta passionately. “At the moment people think of us like lepers. One ill girl said to me “We should all be shot!””

Incidentally, the young couple considers that they have successfully overcome the stress linked to their disease and dream of having children.

“Specialists say that they may be born healthy. I would like to have three straight away,” smiles Svetlana. “And let the first one be a girl, with eyes as big as Ilya’s, so she can flutter her huge eyelashes just the same!”

Extract from the Miss Positive interview:

“When I found out that I was infected, it seemed to me that as soon as I left the doctor’s office I would be arrested. But I would not hide my pain and I think that my public acknowledgement will help many who live in solitude to understand that it is possible to live with this.”

“Before I never noticed how leaves fall from the trees, now even in the dusty city I can smell the flowers, I look at people and see their hearts! I have learnt to tell from a person’s eyes that their soul is crying.”

“It is especially insulting to country girls. They are virgins when they marry, but they are ill! Their husbands bring HIV from Moscow where they go for earnings. And the poor girls only find out about it when they are already pregnant.”