Doctors take huge nails, needles and bomb fragments out of their patients

The board hit against the nail, which went into the child's ear and came out of his nose, having pierced his head through

Vladimir Karpov chairs the ENT department (ear, nose, throat) of a local hospital in the city of Stavoropol, in Russia's south. Mr. Karpov has spent over 20 years of his life helping patients that suffer from ENT diseases. Throughout all these years Vladimir Karpov was “collecting” rare incidents of medical practice along with X-ray photographs of unique patients.

”My passion for collecting such stories started in 1987, when an elderly man addressed to me complaining of nose pains. When I examined him, it turned out that he had a fragment of a bomb stuck in his nose. He got the fragment during a bombing in WWII years. The piece of iron was not causing much trouble to the man, until it started inflicting pain 43 years later.

”There was another very interesting incident in my practice. A two-year-old child was playing with a 20-centimeter-long nail on a construction site. A wooden board fell on the child's head. The board hit against the nail, which went into the child's ear and came out of his nose, having pierced his head through. That was more than just horrible. We luckily managed to save the poor child. The boy is absolutely fine now.

”A gypsy girl once gave a glass of water to her sister. The latter gulped down her drink and did not notice a thin needle in the glass. We never managed to find out if the needle had been placed in the glass of water deliberately or not. When the girl 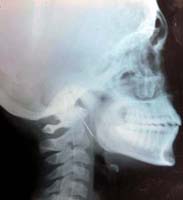 swallowed the needle, it stuck in the soft tissue of the throat. The girl did not feel well after such a “refreshing” drink. Her relatives tried to take the foreign body out themselves, but they only made the matters worse. When the girl was finally hospitalized, we had to remove one of her tonsils to take the needle out.

”There were certain occurrences when we were not able to help a patient. I remember a horrible

incident when a cook took a piece of meat to see if it was ready or not. She choked the piece and could either swallow it down or spit it out. The woman did not want to die from her own meal: she decided to pull the meat down. It seems amazing, but she grabbed a wire brush and plunged it down her throat. The woman died from severed gullet,” the doctor said.

Vladimir Karpov showed a photograph of a local resident. The picture depicted a scarred nose of a man. The nose was the size of a hen's egg. ”This patient was drinking alcohol during his entire life. The hard drinking made his nose grow to this size as you can see on this photo, said the doctor.