Fat woman loses weight and disappears from her husband’s bed

A woman living in the Russian city of Kaliningrad has lost 45 kilos in four months. Marina Simakova has invented her own technique to get rid of obesity and obtain the luxury of leading a normal human lifestyle. Marina is a happy woman now. However, her new body has become quite a big problem to her husband who can not find his wife in bed at night. 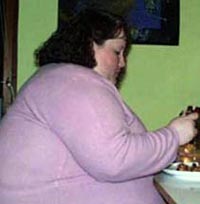 Fat woman loses weight and disappears from her husband’s bed

Marina Simakova was literally dying under the weight of her own body. The woman was 115 kilograms heavy; she constantly suffered from asthmatic fits and heart disorders. Marina has tried many conventional and exotic diets, but none of them seemed to do any good. She tried the anti-fat code method too, but could only put two more kilograms of weight instead. When the woman had to call ER doctors almost every other day, Marina decided that she would bend over backwards but lose her excessive weight. She started practicing her own set of physical exercises.

Every morning the woman would make her husband help her take their daughter’s bicycle out. She would then ride the bike for two hours non stop. When Igor (Marina’s husband) was repairing their old car in the garage, the woman would run 100 circles around the garage place. Every evening she would go out for walks – 10 kilometers daily.

That was the hardest exercise for Marina to do. She would come home totally exhausted. She wanted to throw herself on a couch and sleep, but she never allowed herself to take a rest during the day. After a quick shower she would do the housework – cooking, washing and cleaning. If there was nothing to do about the house she would start doing exercises at home.

That was Marina’s daily schedule for four months. “When we got married, Marina weighed 100 kilos. It was not a problem for me, I was deeply and madly in love with her. I would never let her do all that if she did not suffer from her weight,” her husband Igor said.

Marina’s efforts brought their results after the first month of wearisome physical activities: she lost 19 kilos. She realized that she was taking hazards but she did not even think to give it up. When the four months of exercises ended, Marina weighed only 70 kilograms. “I feel like I was born again. We went to buy me new clothes altogether. We had to buy everything - from new underwear to new coats. I gave away all of my old huge clothes to my mother. I was overwhelmed when I finally got a chance to put on jeans for the first time in my life and button them up without a problem!” Marina said.

The woman’s husband, Igor, was shocked with the changes that happened to his wife. Marina became a whole new person, and Igor did not know how he could continue living with his “new wife.” “It seemed to me that I had a new wife after I had been married to Marina for 13 years. I was horrified at first, especially at night. I would wake up at night, reach my arm trying to touch my wife, but I could not find her there – that’s how thin she has grown!” the man exclaimed.

Another Russian woman, Irina Taktayeva, a resident of Kurgan, has achieved a less effective, but quite a successful result in the struggle against her own weight. The woman lost 40 kilos. Irina is only 28. She weighed 65 kilograms four years ago, but then suddenly started putting on weight and eventually turned into a 105-kilo woman.

Irina started suffering from depressions after several years of her happy marriage. Outwardly, she had a comfortable life, but inwardly she felt she was not a happy person. She was spending her entire days as a housewife, while her husband was working all the time. Her household routine became a torture for her, so she found food as a way to forget about her problems.

“I lost interest in life. Food became to me a distraction from the daily routine. I would eat a chocolate bar for example and feel a lot better,” Irina said.

It goes without saying that the inner comfort that the food was giving Irina had a downside too. The woman realized that she could not live like that every time she looked at her reflection in the mirror. First off, she decided to find her place in this life. Taktayeva started jogging six kilometers a day. “I gave way to despair when I didn’t know what I was living for. When I grew thin, I became a fitness instructor and realized that it was exactly what I was looking for. This job has opened a new world for me. Moreover, it gives me an opportunity to help other people too,” she said.

Rosali Bradford is the woman who has been able to achieve best results in terms of struggle with obesity. She went thin from 544 to 128 kilograms in seven years and thus set a weight loss record for women – 416 kilos. John Brower Minnoch, the world’s fattest man, grew thin from 635 to 216 kilos in two years.