Drivers may earn money for observing the rules 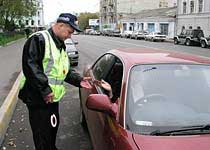 Russian traffic police uses unusual methods to improve drivers' behavior.
May 17, the Moscow traffic police and the Komsomolskaya Pravda newspaper announced beginning of the Safe Crossing action, as a result of which highway patrol will award the most polite drivers with free petrol to the sum of $2,000.

The Safe Crossing is meant to improve the mutual understanding between drivers and pedestrians, to make them act like partners; and the main goal of the project is to considerably reduce the number of traffic accident victims.

Another goal of the project is to revive the prestige of the traffic police, the authority which is considered to be the most evil grafter in Russia.

The Safe Crossing seems to have started at the right time. It is an open secret that Russia's traffic police is scarcely respected, and many participants of a press conference devoted to beginning of the action confessed that traffic police was not popular among Russian drivers.

The Safe Crossing action is to begin June 1 and last till July 31. Within this period, traffic police officers will circulate leaflets with the terms of the action and Safe Crossing stickers among drivers. Any driver may become an official participant of the action by sending SMS to a special phone number and then just follow the highway regulations. During the action, good drivers may win free petrol and even $2,000.

However, the organizers of the action emphasize that it makes sense to teach pedestrians to be particularly careful on the road and follow the traffic regulations either.

Today the effectiveness of the action doesn't look obvious. Will drivers and pedestrians be more careful on the road after the two-months action is over?

Composer Maksim Dunayevsky says that within the ten years of his living in the US, traffic police officers never stopped him on the road. "And this is not because I am a conscientious driver. American drivers prefer to follow the traffic regulations than pay a pretty sum of about $500 to the traffic police for offenses. As a result, there are less traffic accidents in the US."

Irina Osokina from the Russian Union of Insurers says that bigger penalties for careless drivers are not a way out; on the contrary, this measure may even increase the amount of bribes offered to traffic police officers. Punishment of careless drivers must be inevitable in Russia. Drivers must be economically motivated to behave correctly on the road, and this is the only solution of the problem, Osokina believes.