Nature programs poltergeist into every human being

A shower of stones or pieces of bricks falls over the house all of a sudden. The windows are broken and things fly into the house. The doors bang as by themselves and strange noises come out of the walls and furniture. Things seem to be carried around by somebody invisible. Sometimes a strange shape seems to appear out of nothingness. You can even see water, blood, burning oil or other liquid gushing from walls or ceilings. Invisible creatures can leave marks on your clothing and inflict injuries on your body. If you happen to witness any of the above, please be advised that poltergeist is in the house. Vladislav Bukreev, a physicist from the Russian city of Voronezh, never doubted the existence of poltergeist. He says he spent all his life studying the unknown and mysterious including poltergeist, UFOs, ball lightning, magnetic fields, earth's internal energy etc. 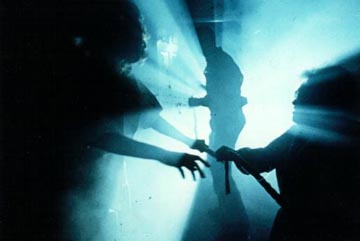 Mr. Bukreev says the people should look after the earth's physical and spiritual state. He asserts that numerous natural disasters are directly related to the poltergeist activity. He says the first poltergeist stories date back to the 16th century (poltergeist stands for “a noisy spirit” in German). The most violent outbreaks of poltergeist were reported in England during 1977 to 1978. A family in Enfield, a northern neighborhood of London, was driven to despair by the angry spirits. The bulky pieces of furniture were moved about the house.

The teenage girls were lifted up and carried around in midair by some strange force. The Enfield phenomenon gave rise to another round of speculation about the link between the presence of children, especially girls, in a state of puberty, and the manifest signs of poltergeist. Researchers began to interpret poltergeist as an unusual display of sexually-charged mental tension. It was regarded as a safety valve for venting off energy. “However, at times poltergeist behaves quite well, I would say it develops a greater attachment to the people than to a place, and it should follow the people wherever they go,” says Mr. Bukreev.

The basis of  a “noisy spirit” can be built of energy, physical, chemical, biological, and mental components, according to Mr. Bukreev. He believes that nature programmed the poltergeist into every human being. He also says that common nervous breakdowns and explosive mental states are also the poltergeist manifestations of a soul that is deeply distressed by grievous events of the outside world. Mr. Bukreev says we should take into account that the rules of poltergeist and rules of our world are opposites.

Vladislav Bukreev is confident there is always a way to try and get rid of poltergeist or at least to keep it in check. He admits that it is hard to give any kind of advice since no human being can be aware of a particular occasion or circumstances leading to another energy resonance of things and events. “Using one's high spirits and benevolent attitude seems to be the only way to soften the effects of poltergeist,” says Mr. Bukreev. Sometimes an exorcism or a prayer can help dispel the acts of poltergeist. And pets normally scare off the noisy spirits from the house. No cases of poltergeist were reported in the households with a cat or a dog.

According to Mr. Bukreev, poltergeist is an active display of mental energy of those who are prone to showing strong emotion, and pets can effectively give comfort to such people and relieve the nerve strain. “Falling into despondency is said to be a deadly sin so you had better keep smiling and enjoy life,” concludes his story Vladislav Bukreev.