Addiction to panhandling can bring up to $2,500 of monthly profit

Russian journalists discovered a whole village of panhandlers, in the republic of Mordovia. The village of Naiman is known in Russia nationwide owing to local swindlers, who travel all across the country, begging people for money and saying that they lost all their property and documents in fire. The history of this local business counts hundreds of years already. 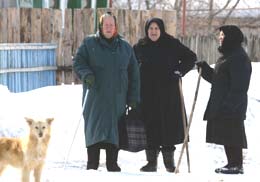 Historians still do not know the roots of the tradition, with the help of which local village people can make their living and fill family budgets. However, the majority of Naiman residents still use panhandling as the central source of income. It goes without saying that they prefer not to talk about the real reason of their business to take money away from people. If someone becomes too sociable on the matter, he or she will be announced persona non grata in the village. Local specialists say that Naiman panhandlers can make up to 40,000 rubles a month (about $2,500).

A group of journalists offered quite a good reward to a person, who would unveil the secrets of the ancient profession. The village residents turned the offer down, though. The journalists, however, managed to find out several secrets of the lucrative village business, the Mordovian newspaper Stolitsa S wrote.

Naiman residents used to travel all over the USSR, presenting fake certificates to “prove” the loss that they suffered in fire. The panhandling business subsided in the middle of the 1980s. Village people started working in the local collective farm, Trud (Labor), which repeatedly won national awards for elite cattle. The break-up of the Soviet Union changed everything: a private company purchased the collective farm, and it went bankrupt in five years.

The village people had to recollect old traditions again. Women started organizing trips to other cities and villages of Russia, begging for money and then returning home with quite good profits. As a rule, panhandlers spend their nights in trains, traveling from other town to another: they do not have to cover hotel costs at this point. The profit definitely depends on the payment capacity of the giver. Beggars, therefore, have special techniques, which they keep in absolute secrecy. Some beggars say that they become addicted to their life of wandering: they say that it is a very good rest for them. Others are moved with envy. “A neighbor of mine has recently seen her friend's daughter wearing a very nice gold chain. The next day she set off traveling to be able to buy a nicer chain. Some people simply cannot stop. We have an 80-year-old lady here, who continues traveling all over Russia, making a very good extra profit to her pension,” an anonymous local resident said.

Teachers of the Naiman school say that such families are absolutely normal and socially stable. As a rule, parents are not addicted to smoking or drinking alcohol. On the contrary, they take care of their children and try to provide them with good clothes, food and education. Young families do not have any considerable problems in the village: their parents provide them with homes, furniture and so on. The residents of Naiman are perfectionists: they want their homes, cars and wedding parties to be as perfect as possible.