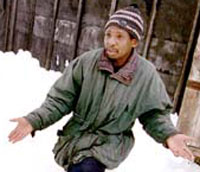 The police in the city of Voronezh has recently detained Josef Habimanu who is also locally known as Maksimka.

For the period of four years, the citizen of Rwanda is reported to have grossly violated the rules applicable to foreigners' stay in the Russian Federation. All that time the detainee lived in the village of Gremyachy Kolodez.

Mr. Habimanu, a former student, reportedly lived like a rural resident running errands for local people in exchange for board and lodging. He did not drink, did not get involved in antisocial behavior, and enjoyed talking to reporters. He said that he had come to Russia to earn a degree in university but soon the war broke out in his homeland. Then he ran out of money and was unable to pay for his education. "I'm the man without a passport," he used to say talking to reporters.

Elena Vasilieva is a disabled elderly woman. Regular housekeeping was a big problem for her until Josef or Maksimka came along and offered his services. Josef asked the old lady for lodging and she let him in. Soon he began helping her by carrying water and firewood to the house. He also looked after the house. He proved to be a hardworking and diligent person, a sort of indispensable helper a disabled old woman could only dream of. 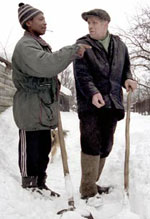 Mr. Vasilieva developed a deep attachment to Josef. She thought she could even do a bit of matchmaking for the black guy. But Josef refused to talk marriage until he settled down and became a real breadwinner. Besides, a student's record book was the only document he had in his pocket.

Mr. Habimana arrived in Russia in 1994. Having spent a year attending preparatory course at the Patrice Lumumba University in Moscow, he was sent to Voronezh to be enrolled in the department of mechanical mathematics of a local university. He studied in the university for four years, was reported to be an average student. Then a civil war broke out in Rwanda and the flow of money from home ran dry. He was told that tuition to complete his education would cost him $1,000.

Mr. Habimana took a year-off at the university to get the money for tuition and make both ends meet. He began working as a loading hand and rented a tiny room in a communal apartment. He did not know at the time that more troubles were coming his way. Once he called home and a stranger informed him that his father and two brothers had been killed and his mother moved away. Then his money and his passport got stolen.

Mr. Habimanu made a few attempts to get himself a new passport but to no avail. The embassy of Rwanda had shut down by that time in Russia, the nearest one was in Germany. No reply came to the letters he sent to Germany. The local authorities first issued him a document certifying that his passport was lost. Then they told him to refer his case to the embassy. His compatriot, a guy called Bon advised him to head for the country where life was cheaper and people were more simple-minded. Josef followed his advice.

Mrs. Vasilieva still keeps a bunch of newspapers with articles about an unusual peasant in the Voronezh region. Many reporters left their business cards in her house while interviewing Maksimka. The old lady was going to call a reporter or two and tell them that Maksimka had been taken into custody. But for some reasons the black guy took all the cards with him before the police put him in a patrol car. So now Maksimka and the cards are in a holding cell.

The Voronezh police do not give any official comment regarding further developments in the case of Maksimka. On the other hand, police officers can tell you a great deal about the case off the record. They normally start by cursing the civil war in Rwanda along with the Russian laws. In theory, Maksimka should be fined for violating the rules applicable to foreigners' stay in Russia. But imposing a fine on Maksimka would certainly entail deportation. The whole matter boils down to paperwork and money. The authorities have no idea who would provide necessary paperwork and where to the guy should be deported after all. Not to mention the deportation costs which are roughly estimated at $2,000.

Mrs. Vasilieva says Maksimka would not mind staying in Russia. The question is: how? How can a person without any documents apply for a residence permit? According to some officials in the Voronezh law enforcement agencies who requested not to be identified, Maksimka is a misunderstanding and headache, period. The authorities are likely to set him free quietly but he should not have been detained in the first place, according to the police.