Paul McCartney has found himself in the center of a sex scandal. His forthcoming 64th anniversary, of which he sang in his Beatles song When I’m Sixty-Four is not going to be a happy birthday for the legendary musician at all. No one is going to cook meals for him, knit sweaters and send greeting cards, as Paul McCartney was dreaming 40 years ago. The ex-Beatle showed his wife, Heather Mills, the door. 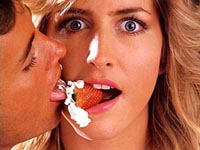 Hardly had the couple signed the divorce documents when Heather Mills surprised Paul McCartney to the utmost. The surprise has apparently become the worst of all that the musician has ever had in his whole life.

Britain’s notorious tabloid The Sun brutally defamed Sir Paul McCartney’s name chasing for sensations. The newspaper has recently published a series of explicit photos of McCartney’s second wife, Heather Mills. Journalists and paparazzi photographers were picking up on Heather’s prosthetic leg during the romantic period of her love affairs with the ex-Beatle. Now that Paul and Heather’s marriage no longer exists, the press switched on to her breasts and other body parts exposed to the maximum.

Journalists got hold of the book titled Die Freuden der Lieber (The Joy of Love) published in Germany in 1988. One hundred and twelve pages of the picture book are nothing but a guide to sex life. Playing with sex toys, strip poker or having sex in front of a mirror are the most decent ones of the racy photographs in the book. Heather Mills is the central character in this German version of Kama Sutra. She made her explicit appearance there when she was 20 years old.

Another British newspaper, The Sunday Mirror, decided to continue with the scandal and add more fuel to the fire. The newspaper found the man who was pictured on the photos published in the above-mentioned German book of love. The man, named as Peter Wilson, agreed to give an interview. Peter, now 48 years old, says that Heather was a very hot young girl at the time when he met her during the photo shoot. “She was ten years younger than me back then, but I could see that she was very experienced in sex. When I actually found out many years afterwards that she was married to Sir Paul McCartney, I could not believe it,” the man said.

Peter Wilson also said that they talked once about The Beatles in between the photo sessions. “I told her that I was coming from Liverpool . She started talking about The Beatles. She said: “Everyone knows that John is the most talented one of them whereas Paul is just a showcase.” She was obviously enjoying herself during the photo shoot. She liked even the SM part of it, she was doing more than was actually required,” said the former actor.

Heather Mills McCartney’s lawyers have not commented on the recent publication in The Sunday Mirror yet.