Whether you call it football, futbol or soccer, the game that will capture the world's attention for the next month during the FIFA World Cup is governed by forces other than just a player's hard work, timely reflexes or seemingly magical foot skills. 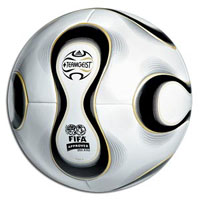 In the opening match of soccer's World Cup Friday, German midfielder Torsten Frings scored an amazing goal from 40 yards out. The ball started off straight and then tailed sharply to the right in the last 10 yards or so. It was an unstoppable shot, but with a different ball it might have been a simple save.

A scientist has explained why a new ball being used in this year's World Cup is frustrating goalies.

The new Adidas Teamgeist football, as it is called, has 14 panels instead of the 26 or 32 that traditionally create the hexagonal pattern.

Fewer panels means fewer seams, which will make the ball behave more like a baseball, says Ken Bray, a sports scientist at the University of Bath in the UK.

Complex whirls of air cause a spinning ball to drift toward the side that's spinning away from the ball's direction of movement. A ball that's not spinning can bounce around unpredictably. Pitchers rely on this physics when throwing knuckleballs.

A good knuckleball is crazy because the ball rotates lazily in the air and the seams disrupt the air flow around the ball at certain points on the surface, Bray said.

"With a very low spin rate, which occasionally happens in football, the panel pattern can have a big influence on the trajectory of the ball and make it more unpredictable for a goalkeeper," Bray said last week.

The foolwing are the most interesting situations that could happen on a football ground among which are tricky shots and blind referees.

Similar to how a billiards player puts English on a ball, a soccer player can influence a ball's spin by striking it in various spots. If done correctly, a spinning ball can bend like a banana around a wall of defensive players or float like a frustrating knuckleball towards the goal.

Here's how it works: A forward-moving ball spinning in the clockwise direction creates greater air friction on its left side. This is because the left surface of the ball is moving against air flow.

This creates a slightly higher pressure on the left, causing the ball to move toward the right as the pressure tries to reach a balance. The opposite occurs for a ball spinning counterclockwise.

The faster the ball spins, the greater the friction and pressure difference, which leads to a bigger and more deceptive break.

Scientists call this effect the Magnus force, whereby an object's rotation or spin affects its path through air or a liquid. The Magnus force plays a role in other sports, too, particularly in baseball. Magnus force named after Heinrich Gustav Magnus, the German physicist who first described it (although some people claim Isaac Newton did it first).

A new ball introduced in this year's World Cup has proven even more frustrating than normal, as fewer panels and seams have caused the ball to fly even more unpredictably.

Picking up a ball's spin might help a player judge how the ball will break, but Cathy Craig, a psychologist at Queen's University in Belfast, Northern Ireland, has bad news for players: Their visual systems can't process this information.

Craig enlisted 11 players and nine goalkeepers from elite European professional teamsto determine how well players can interpret how spin affects the ball's flight. Each player donned a virtual reality helmet that gave the perspective of standing in the center of the goal. They could look around the stadium, but there was no visual clutter, just a ball sitting 33 yards straight ahead, about the location of the average free kick.

When the ball was virtually kicked toward the player with no spin, but still having gravity affecting its flight, the players consistently judged accurately whether it would enter the goal. But when the ball spun clockwise or counterclockwise, even the expert goal keepers were lost.

"Gravity is constant and we've known how to deal with it since we were born," Craig told LiveScience. "But we're not used to dealing with spin, and our nervous system is better at dealing with invariance than things that vary all the time."

In the future, Craig suggests goalkeepers might prepare for an opponent by using a similar virtual device to accustom themselves with the type of spin the opposing free kick specialist puts on the ball.

It might also be good testing ground for manufacturers developing new balls. Sometimes engineers design a ball that flies well in a wind tunnel, but players hate it because the pattern painted on it makes it appear to wobble in flight. Trying out new paint jobs in a virtual setting could help companies develop a ball that both physicists and players love.

Soccer referees draw plenty of criticism from fans, but incorrectly calling "offside" tends to be the source of extreme ire.

The offside rule states that no offensive player is allowed to run past a defender and then touch the ball unless the ball is already in front of them. What makes it tricky is a player can run past a defender to receive a pass as long as the player has not passed the defender when the ball was kicked.

A wrong call one way can kill a team's legitimate chance of scoring, and a bad call the other way can allow a cheap goal.

Francisco Belda Maruenda, a physician and researcher in Spain , would tell you not to be so hard of the referees, since they're being asked to perform a physiologically impossible task.

The ability of the eye to change focus on a far object to one located less than 6 yards away is called eye accommodation. For most people, it takes around 600 milliseconds. Since the players and ball are spread all over the field, a referee almost always performs eye accommodation when making an offside call.

But according to Maruenda, the average running player can move roughly 5 feet in the time it takes for the ref's eyes to refocus, so 600 milliseconds is just too slow.

To make an accurate call, "it is necessary to stop time and to locate all the players who take part in that game in zero milliseconds," Maruenda told LiveScience. To watch the player making the pass, the player receiving the pass, the defender, and the ball at the same time is just too much for our visual systems to handle, especially from the close-up view of the referee.

Some soccer officials have suggested giving a referee a bird's-eye view of the game and freeze-frame television technology to make better offside calls. Until then, it's worth noting that fans who bash refs for bad calls suffer the same blindness to the truth.