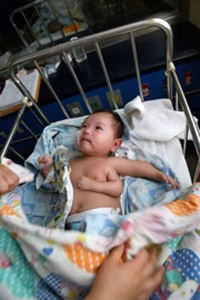 The baby with three arms was born in Anhui provinces in the east of the country. The child has one right arm and two left arms. One of the left arms lacks the palm, whereas the bone of the other one is curved in the baby’s elbow.

“I have never witnesses such a strange abnormality during my practice in medicine. For the time being we do not know the reason which led to such a deformity,” the chairman of the orthopedic surgery of the Chinese hospital said.

The Chinese doctors have decided to amputate one of the baby’s left arms. However, they do not know which of the two left arms will be removed, The Shanghai Daily reports.