The international convention “Fitness for everyone” kicked off in the city of Irkutsk May 20th. The event of this kind will take place in Irkutsk for the first time. A 10-hour fitness marathon is part of the show. The marathon is expected to display the latest trends in aerobic dancing, Eastern martial arts, and yoga. The show will be attended by the following honorary guests: Alexei Nemov, a famous Russian gymnast and four-time winner of the Olympics; Pier Jackson, a professional dancer from the Dominican Republic; Mukhtar Gusengajiev, the world’s most flexible man whose record achievements are certified by the Guinness Book of Records. 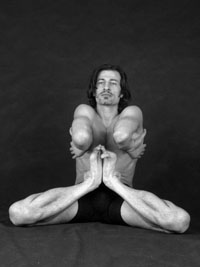 The case of Mukhtar Gusengajiev effectively demonstrates that man can knock his life in whatever shape he wants to. The would-be worldwide celebrity was just a shepherd in Dagestan until he turned 17. Then he had to pass through the terrible test of incarceration. He was locked up for several years following his involvement in a gang of thieves. Mukhtar says he began working on the flexibility of his body when he was behind bars. After his release, he spent a year in Siberia building cowsheds. Finally, he made enough money to pay for a train ticket. The train was bound for Moscow. In the capital Mukhtar was hired by a state-controlled circus after performing a few tests before the selection committee.

The year 1995 was a turning point for Mukhtar’s career. He entertained spectators between the fights at the Russian kickboxing tournament held in Moscow in 1995. Jean-Claude Van Damme, who was invited to the tournament as an honorary celebrity guest, took notice of Mukhtar during the show.

“He wanted to meet me because he planned to put me in a movie. But that movie was half the way through so Van Damme had to abort his plan. But I had been dreaming of “discovering” America ever since that memorable meeting. After arriving in Las Vegas, I saw those big street screens showing various videos all the time. And I told myself: ‘I will make every effort to get my video run on the screens.’ My dream came true after a while. I haven’t worked in the States for two years now. But they keep showing my videos on those street screens,” says Mukhtar.

During his stint in Las Vegas, Gusengajiev performed in the most luxurious and famous theater. One night the illustrious movie star Demi Moor showed up backstage. “She was in the company of her fiancee. She came to take a lesson, which I gave her with pleasure. She seemed to enjoy it too. By the way, she looks terrific both on and off the screen. But the Baywatch star Pamela Anderson looks a lot better on the cover of glossy magazines than in the flesh, as far as I’m concerned. I gave her a few lessons too, and she gave me an exquisite tracksuit. Hollywood stars do understand that yoga can show them the way to health, beauty and wisdom. They do yoga in an active way.”

Mukhtar is going to demonstrate a small set of exercises to Irkutsk spectators. The set involves all muscles of a human body. Men and women will be able to turn into incredibly flexible creatures by doing the set patented by Gusengajiev. An average individual uses only 20% of his physical abilities. Flexibility can give you freedom and clarity of mind. It can keep you young, healthy and happy, according to the yogi. He says his occupation enabled him to travel round the globe and learn six languages. It also brought out his new talents: Mukhtar can paint, play musical instruments, and write books. He has collected 960 aphorisms, he is planning to publish a compilation of them after his collection has a thousand clever sayings. These days Mukhtar Gusengajiev lives in Moscow. He got back from America two years ago because he could not fight his homesickness any more. He is on tour most time of the year. He does not perform very often in Russia because it does not pay. So the Irkutsk residents have a lifetime chance of seeing the legendary yogi who can perform miracles using nothing his own body.