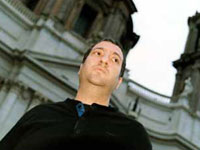 An exhibition of an American photographer who has made a name for himself by organizing mass nude displays is currently being held in Moscow.

The general opinion about nudes seems to have changed for the better in Russia. There are more and more people who do not think it is scandalous to pose nude in public places, because naked bodies are beautiful as a rule.

Guide Sabina Orudzheva working at the Moscow exhibition explains why Spencer Tunick, this is the name of the photographer, prefers this style. "His main purpose is to break down people's subconscious reflexes, in particular those ones connected with the fear of a naked body. Naked people are part of the nature; it is building material like wood or stone. Spencer Tunick just emphasizes this fact by organizing mass nude displays against the background of some architectural building." 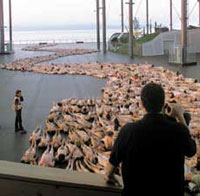 For thirteen years already, American Spencer Tunick has been seeing the world as consisting of two camps. There are over 50 thousand of volunteers who have posed to the photographer. However, there are millions of others who blame Tunick for his immorality.

The opposition nearly ended in a slaughter in Chile in 2002. Seven thousand of volunteers gathered for Tunick's installation. The photographer wanted to make a remote picture of the nude crowd; in such cases he usually uses walkie-talkie to maintain contact with people. In that particular case in Chile, Tunick lost connection with the volunteers, and the nude crowd was living its independent life. They organized some sort of a demonstration declaring "everyone is free to get nude where he wants." But a crowd of dressed people, as numerous as the nude demonstration, organized a protest action in response. Both demonstrations clashed, and the people remained safe by a miracle.

The terrific demonstration was filmed, and it can be seen at the Moscow exhibition. Besides the tape, the exposition in Russia demonstrates many of Tunick's masterpieces: nude couples at Barcelona central railway station; women over 35 lying on a sandbank in Melbourne; a crowd of tawny Brazilians in Sao Paulo. Doctors and police are always present at every of Tunick's installations (but they never appear on photos).

It is said that Spencer Tunick is going to make a nude display in Moscow.

Guide Sabina tells that this project has been just outlined. Tunick thinks Moscow will do for such shooting, however he fears too many advertising shields and wires may spoil pictures. It usually takes 1.5-2 years to organize such an installation. The photographer and his team need to find a suitable place for a mass nude photo session; publish an invitation for volunteers on the Internet and get permits from the authorities. So, if such a mass nude photo session may take place in Moscow it will be not earlier than next summer.