Life really can be unfair. What some people can only dream about, others get without any effort at all. Admittedly, for those lucky devils, these gifts from fate often turn out to be a genuine trial, turning from pleasure into a torture. No, our story is not another sketch on the theme “Rich people also cry”. This report will not be about money or fame, but a quite different matter. 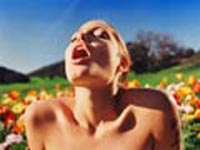 Remember how in the film ‘Vanilla Sky’ Cameron Diaz’s heroine explained to her lover, played by Tom Cruise, that “once” is good, twice is even better, three times is just incredible, but four… Four orgasms took the girl to the height of ecstasy and left her totally exhausted. And now just imagine what would have happened to her had she experienced not 4 orgasms in a single day, but 250. One every five minutes.

It is just that frequently, or sometimes even more often, that young British woman Ellie Allen finds herself at the peak of pleasure. Moreover, unlike Cameron Diaz’s heroine, this happens without any man’s intervention. When the alarm clock rings, that’s one orgasm, the radio comes on loudly – that’s two, the telephone starts ringing – three, the car engine starts – four, and if she’s on the metro, then it really is non-stop: first the escalator, then the train, the loudspeaker announces the station… and so on. Any kind of vibration, even a small one, causes the most violent reaction in the British girl’s body. “It starts from the very first thing in the morning,” says the orgasm victim. “I am constantly being forced to cover up my sighs or quickly leave wherever I am.”

By the age of 28 Ellie has been given the amount of “pleasure” which an ordinary woman does not even experience throughout her entire life. The poor girl doesn’t know where to turn anymore to get away from this misery, which is ruining her whole life, making her constantly look for quite places where there aren’t any kinds of external stimuli. Miss Allen has already given up her job in her usual office long ago, with all its chattering telephones and buzzing computers. Now she works in a quiet gallery. She has the same situation with her living arrangements.

Meanwhile, in her youth Ellie was an ordinary girl, except that her relations with young men gave her more pleasure than her friends. Some time ago she started to experience multiple orgasms, not suspecting in any way that this was the first symptom of the illness which would make her life unbearable.

“Permanent Sexual Arousal Syndrome” – this was the diagnosis of the doctors whom she consulted when she started to throb with ecstasy from literally any breath of wind. With this disorder the sexual organs experience constant arousal even with the absence of any actual desire. The reasons for its onset may be either medicines containing trazadon or excessive blood supply.

It is not yet known whether medicine has managed to help the suffering girl. We hope that it has. For the time being 4 orgasms a day is just as much of an unattainable joy for poor Ellie, as for many woman who can’t even have one.