Mini pigs and dwarfish horses all the rage in Moscow

First miniature Vietnamese pigs were imported to the USA from Japan. They became quite popular in America. Then exotic animals were brought to Europe and Russia. Unconfirmed reports say that originally the pigs were developed for laboratory purposes. But the animals grew big and bulky so researchers had to minimize the breed by crossing wild pigs and small domestic pigs. Their breeding project proved to be a success. 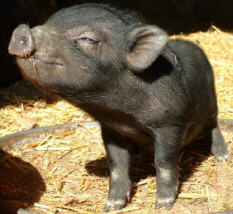 The first dwarf pigs were produced back in the 1960s in Sweden and Canada. There are more than 30 varieties of the miniature pig, one of them is called “Siberian miniature pig.” The Siberian pig was bred in the 1970s by researchers at the Institute of Cytology and Genetics of the Siberian Affiliate of the USSR Academy of Sciences. The miniature pigs differ from the common pigs by their size and a few peculiarities with regard to the structure of their skulls. They also have fewer teats, only 3 pairs as opposed to the common pigs which have twice as many. A minipig normally has short legs, a slightly deflecting back, a sagging belly, and a snout that can be either short or long.

The pigs do not cause many problems if you keep them as pets. Not unlike cats, they like looking after themselves. You can walk a pig two times a day if need be. They can be easily trained. They enjoy the company of their masters but they usually keep away from strangers. Minipigs sell like hot cakes in  today's Moscow. No pigs were available due to great demand. The price range for a pedigree pig with all the necessary paperwork is between $500 and $1,000. The price could be higher depending on a species and pedigree. A pig without paperwork will cost you from $150 to $200. There are a few breeding houses in Moscow that can sell you a pedigree pig for around $400.

Miniature animals seem to be the latest rage in Moscow these days. “New Russians” were after various specimens of exotic animals just a few years ago. Those “pets” were large and carnivorous in most cases e.g. tigers, bears, panthers, alligators etc. Now small is beautiful. Aside from the pigs, the dwarf horses are also quite popular. It is pretty expensive thing to buy, though. A minihorse will cost you about $10,000. A minihorse has the size of a large dog (70cm high in withers). But minihorses live 2-3 times longer than dogs. They eat plain food that consists of hay, vegetables, salt and water. The horses are reported to be very smart and easily trained.