Life is impossible without garbage

Everyday we face garbage: we have to put garbage out of our homes  to garbage containers, we watch, for example, street cleaners doing their job, or notice someone casting a cigarette end down on a floor. Maybe it sounds quite sad, but it is almost impossible to imagine life without garbage. 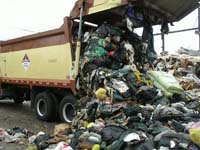 Life is impossible without garbage

The following are some interesting facts about garbage as an inseparable part of our everyday life.

1. The oldest trash heaps, called middens, are in South Africa and contain shells roughly 140,000 years old. Middens—which may also include bones, charcoal, feces, and pottery shards—provide much of what we know about ancient diet and lifestyle.

2. In 500 B.C. Athens created the first municipal dump, requiring trash to be disposed of at least a mile from city walls.

4. One quart of motor oil, improperly disposed of, can pollute 250,000 gallons of drinking water.

5. Each year, consumers in the United States spread 300 million pounds of chemical insecticides, including compounds that the EPA says may impair the nervous system, disrupt hormones in the body, or cause cancer.

6. Landfills are actually the No. 1 human-generated source of methane, belching 7 million tons into the atmosphere each year.

7. British inventor Peter Durand patented the tin can in 1810, which later became the symbol of garbage.

8. Fresh Kills Landfill on Staten Island in New York, which closed in 2001, is the world's largest city dump. Covering about 2,200 acres, it is one of 1,767 landfills in the United States.

10. In 2002 marine researcher Charles Moore surveyed 500 square miles of the North Pacific and found 10 pounds of floating plastic for every pound of living plankton in the water.