The start of the latest beauty contest Mrs. World-2006 in St. Petersburg (click here to pictures of the girls) was a portent of even worse events to come. The most charming married woman of the world was to wear a diadem made of white gold and decorated with diamonds worth about $30,000. The diadem and other articles of jewelry for the contest were seized by Russian customs officers in Pulkovo. The officers cited a lack of required excise clearance for the above jewelry in the U.S. The diadem eventually was released a few hours before the show kicked off. But other problems were looming on the horizon. 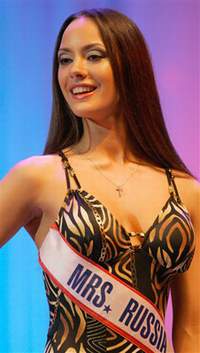 It looks incredible but it is a fact: 20 out of 54 finalists of the national contests could not make it to St. Petersburg due to problems with the Russian visas. The rest of the contestants spent their time going sightseeing around the town, playing bowling and hockey. More importantly, they were polishing up a stage rehearsal of a closing show slated for April 29 at Oktyabrski concert hall.

The fanciest costume competition, the first part of the contest, was the only one that ran smoothly. The jury singled out the Russian participant Sofia Arzhakovskaya dressed like a character from a classic Soviet movie. A woman from Kenya, the only dark-skinned contestant, was also praised for her sense of style. The 46-year-old representative of Bolivia won a consolation prize Mrs. Congeniality.

The show went staggering in a pretty confused way from that point. The American host began shooting the bull in English at a frantic pace, he did not seem to pay any attention to the Russian-speaking audience. Needless to say, he was soon booed and shouted at by the spectators. A female interpreter appeared on stage. But she only made things worse because her spoken command of English left much to be desired.

The audience applauded wildly as a tiny girl dressed up like an angel descended to the stage at the peak of the show. She put a crown of the Mrs. World Contest-2006 onto the head of Andrea Bermudes Romeo from Costa Rica. But all the pride and joy of Costa Rican contestant’s supporters was cut short two minutes later. According to an official version of the story, the interpreter botched things up. The chief member of a jury made a statement saying that Mrs. Costa Rica was in fact a runner-up. The Russian ballerina Sofia Arzhakovskaya, a wife of Sergei Veremeenko who is the co-owner of a mining company Russki Ugol and former presidential candidate in Bashkiria, won the top prize. By the bye, Arzhakovskaya is just 18, a rather unfortunate circumstance for taking part in a contest traditionally designed for women beyond their prime.

Having announced the corrected results of the contest, David Marmell, the chief juror, demanded that cameramen re-shoot the finals. The crown was then removed from Andrea’s head and placed onto the head of Sofia Arzhakovskaya. The move was frowned upon by most members of the audience and contestants alike. The majority of the latter simply refused to climb the stage for the second stage.

In the light of an apparent scandal, some contestants put a direct question to Mr. Marmel: How much did he get from Mr. Veremeenko for rigging the show? Marmell tried to play it down like a joke by saying that he would not mind a “couple of bucks” because he was in dire straits as far as money was concerned. Marietta Shipindell, Mrs. World-2005, did not accept his explanation and said that the contestants really had wasted their time in St. Petersburg.

“We just got fooled for two weeks,” said she. To crown it all, some of the contestants went hysterical and tore up their title ribbons. They are said to have thrown the shreds to the stage. It is highly unlikely that we will see any show called Mrs. World in Russia ever again.