Adoption of children in Russia is getting rather problematic today. In fact, according to the legislation in force neither Russians nor foreigners can normally adopt children in Russia. This issue was touched upon at a round-table discussion on the subject “Children's right for family: adoption problem” on Monday with participation of human rights commissioner in Russia, Vladimir Lukin, and officials from adoption agencies. 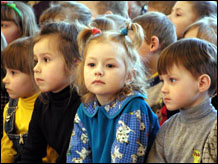 There are 170 thousand of children in the Russian national bank of orphans. Last year, foreigners adopted about 7,500 of Russian orphans, which made up four percent of the whole number of orphans in the bank. This year, foreigners are sure to come across many problems while adopting Russian orphans. Amendments to the RF Family Code adopted in December 2004 stipulate that from now on the period, within which Russians can adopt orphans, will be four months longer. The amendments also apply to the children, whose adoption procedures were successfully completed and they were about to leave Russia. For instance, there is 18-month-old girl Renata from Khabarovsk, who was meant to leave for the US with her new family in December 2004. The girl is suffering from congenital heart disease and must be immediately operated on for heart. The new parents already arranged that the operation would be performed in the US. Unfortunately, the girl is still in Russia because of the amendments to the Family Code.

The number of children adopted by Russians last year is even smaller than the number of Russian orphans adopted by foreigners. Vladimir Lukin explains this not only with low incomes among the Russian population but also with red-tape problems that foster parents come across when they intend to adopt children. Head of the public organization "The Right of the Child," Boris Altshuler, thinks that all information about orphans must become public to improve the situation. What is more, he adds, it will be effective if separate institutions manage adoption and run control over orphanages. Now, regional education departments perform both functions, as a rule. Boris Altshuler says that these departments want the number of children in orphanages to be high, as this means bigger budgetary financing of the institution.

Participants of the round-table discussion seemed to be worried over the Duma's intention to make a law obliging Russia to conclude bilateral agreements with foreign countries, whose citizens want to adopt Russian orphans. First Deputy Chairman of the Duma Committee for the affairs of women, family and youth, Tamara Fraltsova, believes that these agreements will help Russia watch if adopted children feel well in their foster families, and will let the Russian authorities to protect them in case of trouble. But conclusion of such a document with the US may be particularly problematic, as it must be coordinated with each state separately. President of the US National Council for Adoption, Thomas Atwood, fears that if the law comes into effect, American citizens will no longer be able adopt Russian children.

Who are the Ukrainians in your Neighborhood?
20:05
Who are the Ukrainians in your Neighborhood?
19:57
Russia will use all of its military potential to counter Western arms supplies to Kyiv
19:18
German tanks with crosses on them disturb Russian genetic memory like nothing else on earth
18:34
Biden changing strategy on Ukraine to reach diplomatic solution with Russia
17:36
Consequences of NATO's possible supplies of fighter jets to Ukraine get clear
15:16
Ukrainian forces suffer heavy losses while trying to cut across Dnieper
13:35
USA's next step is to suppress European economies
12:52
Victoria Nuland turns herself in about Nord Stream blasts
12:28
Moscow wants to push Ukrainian troops away from Russian territories
19:55
US eco activist arrested for walking calf on Red Square
РусскийDeutschFrançaisPortuguese