Russian girls eager to work abroad, despite the danger of sex trafficking

The Ukrainian Interior Ministry and the Israeli police conducted a special operation, as a result of which an Israeli national recruiting girls from the CIS was detained in Kiev. The recruiter promised various types of employment in Israel, but each time girls were sent to brothels.

The sex traffic problem has been the talk of the day in Russia for at least ten years. So this is strange that within the period just one group of illegal recruiters decoying Russian girls to brothels of the United Arab Emirates was arrested. This is sad but victims of such swindlers prefer to hush up the incidents. 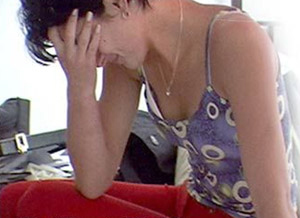 The name of the detained Israeli is not yet disclosed. The investigation has revealed that the man had illegally recruited 35 girls from Ukraine for work abroad. In Kiev, the man is known as a respectable businessman: in addition to human traffic he also works in the real estate business. When detained, the man offered a bribe of $150 thousand for release. He is to be extradited to Israel in the nearest days.

The consulate department of the Russian Embassy in Tel-Aviv knows dozens of stories told by sex slaves recruited in Russia. Being in Russia, girls usually come across tempting ads in newspapers promising up to two thousand of dollars a month and employment of a waitress in cafes or a maid at hotels. When girls arrive at Tel-Aviv's Ben Gurion airport, recruiters meet them and take away their passports and money. Sex slaves were also delivered to Israel via Egypt: they were taken to Cairo by plane, reached the border in a car and then handed over to Bedouins who delivered the girls to Israel aboard a camel.

It is really difficult for such girls to escape when they reach Israel; many of them appeal to the Russian Embassy for help. However, as correspondents of the Novye Izvestia newspaper learnt in Tel-Aviv, people connected with recruiters of sex slaves stand close to the Embassy in wait for fugitives and do not let them escape.

A young woman told her story at the Central Interior Ministry's department of Russia's Rostov Region. “The husband of one of my acquaintances said that his French partners were recruiting Russian girls to work at shopping malls. He promised high wages and assistance in registration of documents for traveling abroad and in fare payment. When we got to Nice, some people took our passports and explained we would have to work as prostitutes. They said we would have to work for three months to compensate the money that was spent to take us out of Russia. Those who did not obey were severely tortured.”

At the end of 2004, a trial on sex traffickers was conducted in the Russian city of Novocherkassk. Some Zaur Mamedov from Azerbaijan came to Russia to recruit Russian girls for sex trafficking to the United Arab Emirates. Three girls from Rostov got into the trap; the net profit the girls made for their recruiters made up $300 a day each. They had to become prostitutes. One of the girls managed to call her family in Russia. The Intrepol and the Russian Embassy in the United Arab Emirates helped the girls to get back home. The sex trafficker was sentenced to five-year imprisonment and had to pay a fine at the rate of 100 thousand rubles. Two of his accomplices were also sentenced to two-year imprisonment.

The Interior Ministry's Central Department of Russia's Krasnodar Region reports that not a single victim of sex trafficking has appealed to the police within the past several years. And this is at the time when Russian girls do fall victims of illegal sex traffickers. Foreign media reported that youth ensemble "Kalinka' from the township of Leningradskaya Stanitsa of the Krasnodar Region came to a festival in Alaska in winter of 2002. Soon, the choreographer of the ensemble was detained, and the dancers were deported to Russia. As it turned out, the choreographer recruited Russian girls to work at American strip-tease bars. According to the Alaska legislation, the man was convicted of illegal trafficking of underaged individuals for work in the US.

However, the sad experience of other girls seems to be not a good lesson for other girls. Opinion polls conducted in the Russian city of Krasnodar reveal that two thirds of schoolgirls and students plan to go abroad for any employment, when their studies end, even if it is dangerous for health and life. Sociologists state that the number of potential sex traffic victims in the Krasnodar Region is over 800 thousand girls who are ready to leave for Europe and the US even if there is the risk of being sex slaves. Experts add that there are millions of potential sex traffic victims all over Russia. The reasons why Russian girls go abroad for work are quite understandable: they cannot earn enough money at home, see the flagrant poverty in Russia, they have no perspectives for the future and no chance to identify sex traffickers among recruiters offering employment abroad. On the other hand, girls make their choice on their own.