Doctors strongly prohibited Russian woman Lilya Shevchik to bear babies, but at the age of 35 the woman already has 13 healthy children and plans to have even more. Now when Lilya’s happy children crowd together around her it makes her smile when she recollects how a gynecologist studied the results of her tests and stated that bearing babies would be lethal for her life. The woman came to the doctor soon after her marriage as her decision was to have many children in the family. Being herself a child from a family with eleven children Lilya could not imagine her life without babies. Her husband Vladimir also came from a family having ten children and did not mind to have many children either. So, in spite of the doctor’s prohibition and warning the woman decided to make an attempt and have babies. 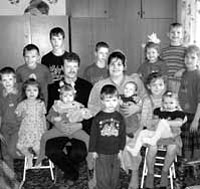 Now the family has seven daughters and six sons. The youngest baby came to the world three months ago and the oldest son is fourteen. In majority of cases, Lilya gave birth to a new baby every year. When doctors studied the results of the woman’s tests during her first pregnancy they were sure she would deliver an ill and defective baby. But contrary to the apprehension, Lilya gave birth to a healthy and strong boy whom the parents named Victor.

The family lived in the former Soviet republic of Kazakhstan where the father had no opportunity to earn much money. Vladimir is a constructor but there were no construction sites in the republic. By that moment the family already had five children. So, it was decided that Vladimir would go to Russia in search of a job to be able to earn money for the family. Lilya and the children went to Russia together with the father. The large family settled in the city of Vladimir where the father managed to find a proper job.

They had some money to buy a small house consisting of two rooms in the suburbs of the city. There was too little room for the big family in the house but Vladimir promised that he would work hard and the family would be able to enlarge the house. And the man kept his words. He began to work in a brigade making repairing in apartments and earned good money. The family felt their life was changing for the better.

In Russia, Lilya turned out to be a unique woman in maternity hospitals. She advised young mothers on nursing and feeding babies. The woman is always kind to young mothers asking for her advice as she knows that having babies is troublesome at the very beginning.

Even though her life is not always easy, Lilya never regrets she gave birth to so many children. At the time when many people believe that having many children is a burden, she knows and feels that her babies are a wonderful support for her and the source of inspiration. Lilya is always sure that her senior children will take good care of the younger. The woman says that her children are always careful with their clothes and toys so younger children can use those things that were used by the senior ones before.

Over the fourteen years of the heroic motherhood Lilya learnt all the peculiarities, likes and dislikes of every particular child in the family; every of the thirteen is special for her. The woman says she will give birth to more babies if she gets pregnant. She adds that her mother gave birth to her last baby when she turned 43. Today, Lilya Shevchik is just 35 and still hopes to have more children.

Every time the mother leaves for the maternity hospital to deliver a new baby, the father runs the house and takes care of the children. Vladimir says that washing and cleaning are not that problematic as feeding the big family. Every day the family eats seven loafs of bread, huge portions of borsch and macaroni. When they go shopping, it is always a wholesale purchase that requires at least two supermarket carts.

But just imagine how merry and happy the holidays and celebrations are in the big family! It sometimes happens that they celebrate birthdays twice a month. The mother bakes the family’s traditional birthday cake, which must be huge indeed. At that, every of the thirteen children gets a present during a birthday celebration no matter if it is his birthday or not. This is the father’s principle to make all of his children happy.

The life of the big family is rather modest, but they never deny themselves little pleasures. The children love family picnics on the river banks and outings in a park. When the Shevchiks are out for a walk, the sight of the big family makes some passers-by smile and be envious while others look at them reproachfully. But still Lilya and Vladimir know they are a happy couple as they have the greatest wealth that people can, their children.