Milla Jovovich is tired of looking at beefy men

The film actress, model, and fashion designer Milla Jovovich (see pictures here) has recently visited Russia to take part in Moscow’s release of her latest movie, the sci-fi flick Ultraviolet. Besides, she was in Moscow to speak how much she enjoyed being a fashion designer. The actress seemed pretty laid-back and benevolent despite some rumors saying her temper is even worse than that shown by some of her movie characters. But the actress really behaved herself in Moscow. At times she even spoke Russian with a slight accent. 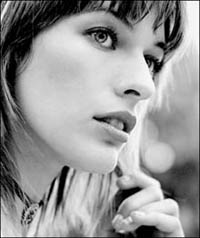 Milla Jovovich is tired of looking at beefy men

Is it true that you can speak Russian fluently?

Yes, I can speak some Russian (speaks in Russian with a slight accent). But there’s really no one I can speak to out there, so it’s pretty hard to keep it in good order.

You are pursuing a lot of things at the same time. You act in the movies, work as a model, and recently you have launched a clothing line. Who do you think you are in the first place?

Well, I’d be damned if I knew the answer to this question. (Laughs) At the moment I feel like a clothes designer. It’s true that all those different things I do may seem ridiculous to some people. But I’m really trying to express myself by all means conceivable and find the best way to convey my ideas to the people. My mom gave me an excellent education and upbringing. The first lessons I learned from her help me out a lot these days. I can show a range of emotions through my acting. Modeling is a different thing. Fashion design is the most enjoyable project I’m involved at the moment. I always liked drawing. Now I try to draw as much as I can. I enjoy spending time on my own when nothing can distract me from my train of thought. Then my sketches are used for bringing out new clothing concepts.

Is your clothing line a success?

On the whole, I guess it is. You can buy clothes of my line in sixty five stores all over the world. There’s also a store in Moscow that sells my clothes, I saw it myself!

You have replaced male actors in the movies, today you are acting in action movies. Do you think this is a normal situation?

I never thought about things like that. And why should I? I love martial arts so I go for them on the set. But it’s a matter of personal preference. Speaking of a worldwide trend, I’ve no idea why it happens. I guess viewers see the problem differently.

Did it ever occur to you that you were surrounded by weak men?

Again, this is a matter of personal attitude. Maybe an audience has simply grown tired of looking at the brawny men in main parts for decades. That’s probably the reason why today’s men are being replaced by women both on and off the screen. Maybe men will get that role back in a couple of years.

By and large, beautiful women play in romantic comedies in Hollywood . You do not seem to be employed in such kind of movies…

Thanks for a compliment, right you are. It’s not that I refuse playing such parts. I acted in a few low-budget independent projects. Has anybody seen those movies? I really doubt. For some reasons, I’m not getting invitations to act in megabucks projects. I wouldn’t turn an offer if I got one.

It has been rumored that you choose your parts very painstakingly

It’s true. What else do I have to do?

Action movies are my favorite. I like the genre as a moviegoer and as an actress. You have to overcome yourself all the time during the filming of an action movie. Besides, martial arts have long become part of my life. Now I seem to be too deep in martial arts. I’m going to get back to independent movies little by little.

Have you ever had to use your martial arts skills off the screen?

No, I haven’t used them yet, thank God.

Why do you choose independent cinema?

I can play most interesting parts and meet with most remarkable people when I play in independent movies, that’s why. No Hollywood film director would ever offer me a part like one of those I did in independent projects. It’s an amazing feeling , it’s like starting all over again every time.

Just like in The Million Dollar Hotel by Wim Wenders?

Absolutely. He’s my favorite director. I’d be privileged to act in his new pictures. And I’m really attracted to real historical characters. I think playing Joan of Arc is just terrific. You become part of a real history of a country.

Do you fancy playing any historical figure in particular?

Well, I’d be glad to play Josephine de Beauharnais during the French Revolution.