Yury and Nina Shumakov from the settlement of Kalikino, Russia, were extremely surprised to see their Pit Bull-terrier revealed motherly heart toward kittens that lost their mother. The warrior canine Gabi took a great pleasure in taking care of its adopted kids. It licked their hair clean and carefully seized at their withers to take them from one place to another. 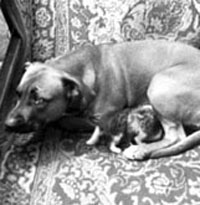 And the dog’s motherly care about kittens was not the biggest surprise for its owners. The dog began even to breast-feed them. The Shumakovs cannot understand how the dog can breast-feed at all because it never had puppies itself. Nina Shumakova says this amusing story happens with her pets for the first time over the several years since the family decided to have domestic pets.

Gabi’s owner says that the dog does not at all reveal the characteristics typical of its breed. Nina does not share the expert opinion saying that Pit Bull-terrier is aggressive and blood-thirsty by nature. The woman’s dog is always friendly toward people and reveals particularly friendly feelings toward other animals that the family keeps. Nina says it makes her smile to see the dog removing burs out of kids’ hair. And still even though the dog is so much tender and caring with others, nobody expected that it would become a ‘cat mother’.

The kittens seem to be happy having a new mother, the dog. The owners called the kittens by the names typical of dogs only. Gabi devotes much time to its foster-babies; even slightest meowing makes the dog give up her doings and rush to the kids.

Yury Shumakov believes that the dog and the kittens will keep their affection forever. He is sure they will still be friendly toward each other when the kittens grow up. It is high time for Gabi to have puppies, it is mature enough. But in their little settlement the Shumakovs fail to find a pedigree male dog for coupling.

Zoology expert Nina Ovchinnikova says stories of the kind are rare but still may occur. She adds that the dog just revealed the symptoms of a would-be pregnancy. “Gabi has no puppies and it reveals the motherly instinct toward the kittens. In two or three weeks the dog will have no milk and will not be able to breast-feed. Its organism will again function as before,” the expert explains.

The family keeping the dog is sure that Gabi will never injure others knowingly. They still love the dog irrespective of those tragic incidents when dogs of this breed tore children or adults to death. The dog enjoys the love of the entire family. And now when it is a nursing mother all humans heartily respect the dog.

13:21
US diplomat says who Putin is friends with among NATO members
17:26
Russia confirms explosions near military airfield in Crimea
16:54
Russian Foreign Ministry lashes Estonia for its call to ban Russians from Europe
21:31
Ukrainian army about to break down completely
21:08
USA will dump Ukraine for Taiwan
20:14
Putin signs decree enabling Russian banks not to work with foreign currency
18:05
Russia sets up army base in Serbia
17:49
Putin refuses to go to 77th UN General Assembly in September
17:09
Finland dismantles Soviet 'World Peace' monument to replace it with tram tracks and sidewalks
16:18
Russia warns of catastrophic consequences should Ukraine continue shelling Zaporizhzhia NPP
World
Instead of new arms, Washington presents Zelensky with 'black spot'