Russian scientists are the first in the world who made wolves serve people. The Perm Institute of Interior Forces have interbred a she-wolf and a dog and as a result of it got a unique breed of wolfdogs. At that, this new breed got an exceptional nose from the wolf and the love to people from dogs. 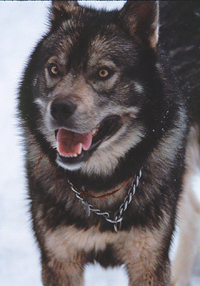 She-wolf Naida and German sheepdog named Baron became the ancestors of the unique species. A couple of most psychologically stable toward humans puppies were chosen out of their several puppies especially for the experiment. Now, researchers already have the third generation of wolfdogs. There are eight animals having 50-70 percent of wolf blood in the institute’s nursery.

Every day of the wolfdogs is devoted to much exercise, and they actually reveal excellent results during training. Teacher of the institute’s cynology chair, Major Vyacheslav Dorofeyev says that it takes ordinary police dogs from 3 to 4 minutes to trace imaginary criminals during training, while wolfdogs can cope with the task within just 15-20 seconds.

Animal trainer Olga Galperina loves to train wolfdogs and admires results they achieve. She says that wolfdogs love to work. “When they enter the training hall their teeth chatter as they are impatient to do exercises,” she adds. Cynologists already know that wolfdogs are friendly indeed and understand that the teeth clatter is no aggression at all.

Experiments on interbreeding dogs and wolves were started rather long ago. The University of Cologne conducted interbreeding experiments and got over 200 puppies whose parents were wolves and dogs but all of them demonstrated cautiousness and fear of humans. So, it made no sense using the new species in work, and it was declared the experiment on interbreeding dogs and wolves failed. It is astonishing that only researchers of Russia’s Perm Institute of Interior Forces managed to establish an effective contact with the animals.

Russian researchers were lucky with the initial material of the experiment. She-wolf Naida was wonderfully friendly. And this is in spite of the centuries-long genetic wolves’ fear of humans. During the interbreeding, Naida rejected a male wolf and itself chose a male dog. It is thanks to the she-wolf Naida that unique puppies came to the world and will soon become wonderful police dogs.

Another unique experiment on interbreeding the jackal and Eskimo dogs (husky) was conducted in Russia. The author of the experiment Vyacheslav Klimov called the new breed of puppies “shakolaika”. The small dogs had exceptional nose and were used for detecting drugs and explosive at airports. Unfortunately, the researcher failed to fight the natural cautiousness of jackals and the new breed of shakolaika turned out to be awfully cowardly. The poor dogs got scared to death just because of a man’s sudden movement or when they saw an unknown thing. That was the reason why the police could not employ the new dog breed in their work.