In Russia there are several thousand crying icons: images of saints are crying profusely in Moscow, St. Petersburg, Sarov, Ekaterinburg, Tyumen, Novosibirsk and on Solovki. 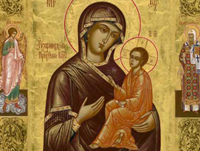 Another such miracle took place recently in the town of Sochi. In the local regional museum a new exhibition of spiritual paintings has opened. A day after the exhibition opened ten icons from 17th-19th centuries suddenly became covered with a white oily liquid with a slight smell of resin. According to witnesses, the icons were crying so intensely that small pools formed on the parquet floor. Museum workers terrified by the miracle immediately closed the hall to visitors and called for priests, who said prayers. After this the entrance to the exhibition was opened once again.

Another report arrived from the village of Rogovatoe near Belgorod. Here in the church run by Reverend Sergey Radonezhsky a whole series of icons of imperial martyrs started crying. Drops of an oily liquid were discovered during the traditional Sunday mass.

At first the assumption was made that the drops were nothing other than condensation or oil which had spat out of a lamp that one of the worshippers had accidentally rubbed against the icon when he was venerating the image. But this version was soon discredited – after all, from the moment it first appeared in the church, the icon had always been kept under glass and was therefore protected against external influences. All the attempts to remove the moisture using cotton wool led to nothing – the beads of oil merely kept reappearing on the icon.

“I want to remark straight away,” academic Pavel Florenskiy, head of a special commission supported by the Moscow Patriarchy studying miracles in churches, told an ACC correspondent, “the phenomenon of icons crying is known us to all the way back to Ancient Greek manuscripts. However for a long time there was no agreement between science and religion. Many scientists viewed such miracles as a fabrication or a common forgery. But nowadays the deep-rooted antagonism is changing thanks to constructive dialogue.”

In the flat belonging to school teacher Valentina Zhuchkova in Klin her icons have been emitting a strange oily liquid for several years. At first this liquid similar to honey in appearance only appeared on the figures of martyrs, but soon other icons began to cry, including those which were kept under glass.

Having arrived in Klin, the first task of the specialists was to examine the casings – these turned out to be completely dry. Then they took samples of the liquid from different icons. To make the experiment fair they also poured out some oil from one of the lamps nearby. A chemical evaluation and a spectrochemical test werecarried out in a forensic laboratory in the capital. It was established that the Holy Oil was made up of more than one substance. The thinner liquids reminded one of normal human tears. The thicker ones were similar to olive oil.

So how can these phenomena be explained? One can suspect that the wooden backing of icons soaks in oils and other aromatic substances used in church. Then with the right combination of temperature and humidity, they seep through onto the surface. But in that case how can one explain the appearance of these drops on paper and even metallic figures? These cases have been known to happen.

Another version is that it is a mysterious substance which results from biochemical reactions in the actual board of the icon, or on the outer layer which covers it. But this assumption is invalidated when it becomes clear how the icon is actually made. On its base is a lime board which is coated with a mixture of glue and chalk, then with egg tempera. The finished drawing is then covered with an oil varnish – this is the only oily substance used on the icon. But the oil varnish quickly dries and it is impossible for it then to heat up at a high temperature and flow onto the surface of the figure.

Unfortunately throughout history there have been swindlers who, in the pursuit of a scandal have preyed on people’s belief in miracles. There is one especially famous case of Peter I exposing such a fraud. During the early years of Petersburg’s construction a rumour spread that in Troitskaya church the image of the Blessed Virgin was shedding tears, which foretold many troubles for the city in the future. The enraged tsar ordered the icon to be brought to him. Having ripped open the casing, he discovered that in the board behind the eye of the figure some small insertions had been made, into which someone’s deceitful hand had placed several drops of thick olive-kernel oil. The heat from candles which had been lit in front of the icon melted the oil and caused it to seep through two imperceptible openings in the board. Having heard this story, there is a great temptation to write off the riddle of the crying icons as pranks played by mischievous urchins.

However tests carried out by scientists from Florenskiy’s commission urge us not to jump to conclusions. In one test the scientists used ordinary grains of corn. They sprinkled a few grams of grains into paper bags. Some bags were left as the control. But others were placed next to the crying faces of the saints. After this all the seeds were left to germinate. In all cases the seeds which had experienced iconotherapy could be distinguished by their increased germinating capacity and more rapid growth.

16:11
Russian Foreign Ministry: Anthony Blinken publicly declared motive to blow up Nord Streams
18:18
Ukraine invites NATO to join conflict with Russia directly
17:57
Zelensky won't negotiate with Russia while Putin is president
16:20
Putin signs agreements incorporating DPR, LPR, Kherson and Zaporozhye regions into Russia
15:39
Putin delivers landmark speech in the Kremlin
15:15
Lukashenko: If Europe wants it, the war may end in a few days
14:54
Ukraine and the West may force Russia to use tactical nuclear weapons
13:33
Russia to take control of entire Donetsk People's Republic within its 2014 borders
19:02
Mobilised citizens to control and defend new Russian territories
15:52
USA can still crush Russia, but it can also save the world from chaos
Russia
Russian Parliament ratifies agreements about new territories