Mortals and saints can remain physically immortal after death

Medical experts state that imperishable remains of senior lama of East Siberian Buddhists, Dasha-Dorjo Itigelov who died in 1927 are similar to tissues of a living man

Russian scientists have confirmed the lama remains are imperishable. However, skeptical people hardly believe this. 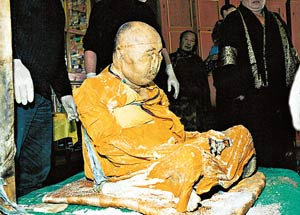 Khambo lama Dasha-Dorjo Itigelov (1852-1927) died not far from the Russian city of Ulan-Ude, the place where the well-known Ivolginsk datsan (spiritual center for Russian Buddhists) was built in 1947. When dying, the lama bequeathed that his sarcophagus must be opened some time later to see in what condition the remains would be. The lama died meditating sitting in the lotus pose, the way typical of a  yoga leader.

Since that, the lama remains were unearthed three times, in 1955, 1973 and 2002. Monks of the Ivolginsk datsan say that each time the remains proved to be intact; they were not exposed to decay. It even seemed that the man just died.

After the last exhumation, the monks decided not to bury the body and placed it into a special glass pack sarcophagus. The sarcophagus was mounted in a special room; it is taken out of the room for the faithful to see the remains. It is prohibited to take photos or video of the lama dead body. The monks say this contradicts Buddhist traditions. Last time the sarcophagus was opened September 11, 2002 in presence of members of the Russian Buddhist traditional sangha and also medical experts.

Head of the identification department in the Russian Forensic Medical Expertise Institute Doctor of medical sciences Viktor Zvyagin told a Nezavisimy Vzglyad newspaper correspondent that identity of the lama body was confirmed by eyewitnesses who had taken part in the previous exhumation. Researchers were astonished at the phenomenon and asked the monks to let them have some of the lama's hair and nails for an analysis. Viktor Zvyagin says that in many parameters the body of the lama looks like a living man's body. Indeed, the skin is flexible, the joints can be moved and so on. Researchers were incredibly surprised when an infrared analysis of the lama tissue samples revealed them to be absolutely resembling tissues of a living man.

The imperishability phenomenon is now well known. There are several reasons why dead bodies can remain intact within thousands of years. Artificial or natural mummification is one of the reasons. Viktor Zvyagin says that natural mummification can be found not only at South African cemeteries. The researcher said that archeologists discovered up to 200 mummies in good condition during the archeological dig on Moscow's Manezh Square. Am ancient cemetery was located there many years ago.

Besides mummification, dead bodies can remain intact also thanks to peat tanning and adipocere treatment which makes dead bodies some kind of a soap. The dead body of Private Doctor of the Russian tsar family Botkin was found in this very condition. Viktor Zvyagin says that no thorough analysis of the doctor's body was done; experts just conducted a tomography analysis to find bullets in the body.

However, none of the above-mentioned methods was used to make the lama's dead body imperishable. Buddhists say that only the most advanced yoga can fall into some particular condition before death and purify themselves so that his dead body could not decay. They also say that besides Itigelov's body, there are just three intact remains of Buddhist saints who are kept in China, India and Vietnam. A Tibetan monastery where one of the imperishable bodies was kept was destroyed in 1959 and the dead body was gone.

It may happen so that the imperishability phenomenon is not an absolute privilege of religious figures only.

Viktor Zvyagin says that during an archeological dig in Italy 15 years ago a dead body of a simple girl was found in this condition. Unfortunately, the researcher says no thorough analysis of the discovery was done. He also adds that researches of this type are at their earliest stage today.

On the photo: The current condition of Dasha-Dorjo Itigelov, who died in 1927