For the last two years residents of coastal areas around the southern and southwestern Caspian Sea have been reporting of some amphibious creature resembling a human being. In March this year an eyewitness account from the crew of the Baku, an Azeri trawler, was published by Iranian newspaper Zindagi: “That creature was swimming parallel course near the boat for a long time,” said Gafar Gasanof, a captain of the ship. 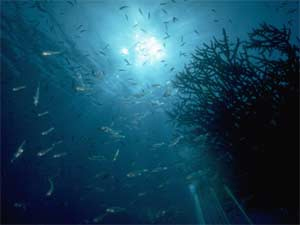 “At the beginning we thought it was a big fish, but then we spotted hair on the head of the monster and his fins looked pretty strange... the front part of his body was equipped with arms!” said the captain. Back in Azerbaijan, nobody took his story seriously. It sounded ridiculous to those who thought that the guy must have been drinking while on board.

On the contrary, shortly after the publication of his interview, the offices of the Iranian paper got flooded with numerous letters of the readers who claimed that the story was yet another piece of evidence proving the existence of the so-called “man of the sea.” The readers pointed out that many fishermen had repeatedly seen the strange creature at sea and on shore after the seabed volcanoes in the area of Babolsera had come to life in February and offshore oil production operations had intensified in the Caspian.

All the eyewitness accounts provide a similar description of the marine humanoid.  His height is 165-168 cm, he has a strong build, a protruding ctenoid stomach, his feet are pinniped and he has four webbed fingers on either of his hands. His skin is of moonlight color. The hair on his head looks black and green. His arms and legs are shorter and heavier than those of a medium-built person. Apart from his fingernails, he has nails growing on the tip of his aquiline nose that look like a dolphin's beak. No information as to his ears. His eyes are large and orbicular. The mouth of the creature is fairly large, his upper jaw is prognathic and his lower lip flows smoothly into the neck, his chin is missing.

Iranians dubbed the creature Runan-shah or “the master of the sea and rivers.” The name is partly based on stories about large shoals of fish accompanying the creature at sea. Other stories refer to the waters that would turn crystal clear and stay that way for two or three days after the creature was seen swimming in those areas. Fishermen claim that fishes that stay alive for a while in the net can feel the creature coming out of the deep blue sea. Fishes were reported producing barely heard gurgling sounds as the monster came near. He was said to answer the call of the catch by making similar throaty sounds.

Some researchers believe that there is no smoke without fire and the stories circulating in Iran can be true. Besides, last May Runan-shah was seen by Azeri fishermen living in the villages located between the cities of Astara and Lenkoran. According to a theory, the creature is not alone; there is a family of underwater humans who are on a mission ... to tackle environmental problems of the Caspian.

The reproduction of flora and fauna in the Caspian has significantly deteriorated due to a surge in offshore oil production operations and underwater volcanic activity in the above parts of the sea. The Astrakhan fishermen have long complained about a decrease in the stock of sturgeon, the total disappearance of sprat and the like. The seafood industry figures indicate that the situation in the southern Caspian has worsened even more this year.

The Caspian Runan-shah is not the only species of underwater humans on record. Both Herodotus and Plato believed that original human beings were amphibious and might have founded an underwater state.

Modern doctors actually agree to that theory by saying that hiccup is an atavism dating back to ancient times when humans had both lungs and gills.

A book of collected scientific articles titled “The Universe and Humankind” that was published in St. Petersburg in 1905 contains a story of “marine female” caught in the Caribbean. It also has stories about dead bodies of the amphibious humans washed ashore in the Azores in 1876. Their descriptions largely correspond with the reported description of Runan-shah.

An amphibious humanlike being was reported in Karelia in 1928.  The creature was repeatedly seen in the lake of Vedlozero by local residents. A group of researchers from the Petrozavodsk University arrived to investigate the case on location. Unfortunately, the findings were classified and the members of the research party eventually perished in the Gulag.

According to latest reports in the media, Iranians have already started their research of the Caspian phenomenon. The international scientific community might as well help unravel the mystery if politics do not get in the way of science this time around.