The Russian authorities are cracking down on manufacturers and vendors of Nazi memorabilia and symbols. A new law provides for imposing of more severe fines and confiscation of goods. In particular, individuals involved in illegal manufacturing and sale of the above items will be punished by a fine amounting to 10 to 25 minimum wages; officials will be fined a sum ranging from 20 to 50 minimum wages; legal entities will be liable to a fine amounting to 200 to 1,000 minimum wages. The recent stringent regulations seem to have impacted on the Moscow flea markets. You can not find any Nazi insignia in stalls. Will the measures have a long-lasting effect? 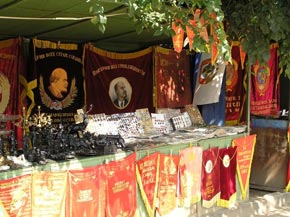 “Here’s an antipersonnel hand grenade and here’s a helmet of a slain kraut, it’s shrapnel-pierced, I’m selling the stuff at a discount!” calls out Sasha, a collector. He does not seem to be making any money at the Izmailovo flea market. Shoppers simply ignore his stall full of WWII ammo, gas masks and assorted uniforms. They are more interested in antique irons and bronze candlesticks. That is why the collector is ready to discount his merchandise.

His flea-market neighbor sells German officer’s jackets and hats. Nobody shows any interest in his goods either. It is drizzling and the vendor is wet to the bone. He pours himself another cup of tea while watching gloomily a group of Japanese tourists buy phony Red Army hats. “Well, let’s call it a day. We’d better move somewhere else,” says he.

The Nazi junk sellers had to obey the new rules. Sasha and his buddy did not want to take a risk either. “I don’t need any brushes with the law,” says a seller of rusty German hand grenades. He has stopped selling German insignia a long time ago.

Collectors of military memorabilia usually mingle on Remesel street in Izmailovo park. Today it looks empty. A camouflaged vendor is obviously bored stiff. First he polishes a shabby helmet available at 7,000 rubles. Then he re-counts the eating utensils that used to belong to German officers e.g. forks, spoons, ice picks. “Are this stuff genuine?” asks one of the kids who are scrutinizing the war antiques. “You bet, fresh from the front… You two looking for something or just looking?” says the vendor, a grain of disdain in his voice. One of the kids takes out a pair of moth-eaten black pants from his backpack. “These pants are genuine German army pants. Uncle Vasya brought them from the war. They are for sale, real cheap. Or we can swap them for that lighter decorated with an eagle,” says the kid.

“Don’t you try to bull me,” says the camouflaged vendor afterbrieflyexamining the inside of the garment. “You’re telling me the pants are genuine WWII combat pants? So why do they have that loony bin stamp?” asks the vendor before throwing the pants back to the kids.

“I never waste my time on such ‘history lovers’, I tell them to get lost right away,” says he and lights a cigarette. “As a rule, we buy stuff from real collectors only. They bring us what we are looking for. Real military rarities,” adds he. “Like one of those?” I point out to a German officer’s jacket at 12,000 rubles. “Why the hell do people buy things like that?” I ask him.

“Well, it’s mostly for somebody’s house collection. You just can’t put on a Nazi greatcoat and go out, can’t you?” he says with a chuckle.

He does not deal in Nazi symbols and mementos. Not any more. He removed the items from his stall soon after the first reports on the new fines began circulating though the market place. “It’s a shame. The stuff sold like hot cakes. And pretty cheap too – from $10 to $300 a pop. Now all the collectors took cover. They’re just waiting for a new development though no one saw a copy of those new rules.”

“It’s an incredible country we live in,” says one of the officials of the market administration. “Everybody hates the Nazis. At the same time, they sell the Nazi symbols under the counter. And they file complaints after we seize their merchandise,” adds he.

The security personnel of the market frisk the stalls for illegal items several times a week.

“We didn’t get any order from above. Fighting against the Nazi symbols was our own initiative, we made a decision before the latest crackdown. Sometimes we find items with swastika on them. We destroy them straightaway as the vendor looks on,” says one of the officials of the Izmailovo market.

You do not have to be an expert to estimate the “cultural value” of monochrome photographs from a family album. The photographs are put out for sale by two women from Ukraine. The pictures show some German soldiers riding their vehicles and zeroing in their new rifles.

“It’s really cheap, just 150 rubles apiece. The pictures are genuine, they used to be kept in the Special Archives of the Ukrainian Soviet Socialist Republic. Look, we even got a picture of Hitler,” says of the junk sellers from Kiev. She shows me a photograph featuring the Nazi dictator amid his officers. I look at the other side of the old photo. It has a mark that reads: “Deleted from records.”