Sergei Vasyura uses his feet as his arms or hands. He uses his feet to look after himself e.g. for shaving his face. He also uses his feet for performing various household duties. He uses them for sawing firewood, doing welding jobs, tending geese, repairing alarm clocks and electric razors. He even uses his feet for driving a vintage Zaporozhets car that was put together by his own hand. I mean he built it using his feet only. 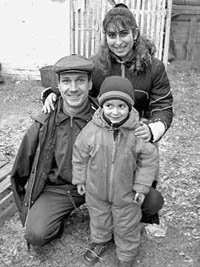 Sergei is very good at swimming. He can swim by slithering his body across the water like an eel. He can also spend hours fishing. No one is there to help him put a worm onto a hook. He can do it in a masterly manner by using the toes of his feet. Neighbors in his village already got used to Sergei’s artful handling of the fishing rod. Only some other visitors from other villages sometimes like to bet that he will not do the trick. The make a bet and they always lose it.

Sergei does not like to recall his childhood. He was born with a deformity i.e. armless. His childhood has always a difficult time for him.

“They told me: ‘Keep off the river or you’re gonna drown,’ but I jumped in the water anyway. I jumped in it and began to swim. People showed a lot of concern as I voiced my desire to ride a bicycle. I’ve built the handlebars longer and wider to steer the bicycle with my chest and shoulders. I did a lot of cycling on the dirt roads. I hit the ground lots of time before I learned how to ride a bicycle. Falling off the bicycle set was not a very good experience. But falling off the bike seat was even worse. I learned to drive my bike anyway,” says Sergei.

“Looks like the Lord looked after me and he still does. I’m a regular guy these days. I’ve got a son and a wife,” says he. He worked hard using hit feet to pay for a house in the village and the all the stuff inside. His monthly disablement benefit was only 500 grivnas. It was just enough to make both ends meet. Sergei was making some extra money by building a fence, fixing a vehicle, or grinding axes or knives. He became a real car mechanic. He assembled four Zaporizhets’s using spare parts, which he bought at a flea market. He finally made three cars out of the spares. He sold two of the vehicles. A third one burned down to the ground. The vehicle caught fire one day after being stored in a garage during a long winter. The pipe work must have leaked fuel. Sergei climbed out of the car just in time to save his life. “The Lord helped me out,” says he. He built another car. He has been driving it since then. He never had a driver’s license. Doctors just refused to accept responsibility for issuing paperwork to certify that a handicapped person could drive a motor vehicle. Sergei is just lucky because all the local traffic cops know him well so he rides his “hot rod” without being bothered by them.

The approaches to the house of the Vasyuara family were simply impassible. I had to park my car pretty faraway from Vasyura’s place that is well-known all over the area. “You got to stay strong and keep your head high no matter what may happen along the way. Man can overcome anything. My wife wouldn’t have had any respect for me had I given in. And I could not have lived a normal life,” said Sergei as we walking back to my car parked on the edge of the village.