Russian boxer from St.Petersburg, Nikolai Valuev, nicknamed as beast from the east, was offered a role in a Hollywood blockbuster. Valuev’s popularity has been growing steadily since he won the title of the heavyweight champion last year. British producer Matthew Vaughn offered Valuev a role in his new film Stardust, which is slated to be released at the end of the current year. 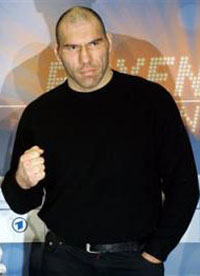 The film is said to be a fantasy story. For the time being it is not known which role in particular has been offered to the boxer. If Valuev accepts the offer, his co-stars in the film will be Robert De Niro, Michelle Pfeiffer and Sienna Miller.

It is worthy of note that it has been the second film offer for the Russian giant. Last year he had an opportunity to appear in the Russian TV series Master and Margarita (based on the classic novel by Mikhail Bulgakov). Nikolai Valuev declined and let his friend take a chance.

It is much more important for Nikolai Valuev to preserve his champion title at present. He is to fight Owen Beck in Berlin on June 3rd.