A snow leopard, or irbis, is a very cautious animal. It is extremely difficult to spot this big cat in its natural habitat. The people working in the Russian Sayano-Shushensky reserve have seen this graceful animal only once in 35 years. The cat appeared on the ridge and vanished in an instant. 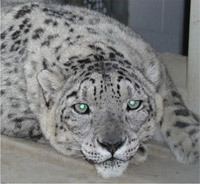 In Russia the snow leopard lives in the so-called Altay-Sayan mountainous region of Siberia. It is impossible to count the exact number of animals living in the area, because the animal lives in hard-to-reach mountainous territories. Specialists say, however, that there could most likely be up to 150 specimens.

Poachers are more persistent in their search for the beautiful animal. They spend days and nights rambling along the mountains and ridges tracing the snow leopard and placing traps hoping to catch it. The game is worth the candle, poachers say. The skin of the rare animal registered in the Red Book of Russia costs $300 on local Siberian markets. However, the prices for the fur skyrocket to $1000 and higher outside Siberia and to tens of thousands of dollars in foreign countries. The demand on the irbis fur is very high, which makes smugglers organize sales channels.

A court in the Altay Republic in Siberia has recently brought down a sentence against a group of international animal smugglers, including a Russia man and two of his Mongolian partners. The police withdrew 15 irbis skins from the poachers. The criminals will have to spend up to three years in jail and pay thousands of dollars of fine.

The authorities of Mongolia have organized a special service to combat the smuggling of irbis fur. Employees of the service say that poachers kill up to 50 snow leopards in the above-mentioned natural reserve every year. This is quite a significant number, taking into consideration the fact that there are about 2,000 of these big cats left in the world. Snow leopards have already been exterminated in India, Nepal, Pakistan and China.

Having a snow leopard at home is considered a sign of power and wealth. People buy not only skin but also irbis bones, whiskers, tails, paws and even internal organs of the animal. They make medications of them in China. One can read the proof on a pack of such a medicine: made from snow leopard whiskers. This medicine is very expensive, but people believe that the beautiful and strong cat will give them more strength. Irbis cubs make another type of business at this point. Poachers trace the leopard’s den, kill the female and take her cubs. Then they sell the little snow leopards to wealthy people who keep the beautiful wild animal at home on a leash.

The international smuggling of animals and birds from the Red Book has been getting more and more threatening recently. Animal traffickers ship the goods to Kazakhstan, China, Europe and the USA. Poachers illegally export specimens of rare falcons to Arab countries where the birds of prey are used for falconry. Last year Russian customs officers of the Krasnoyarsk region arrested a man who was attempting to take boxes of 19 live falcons abroad. When the officers examined the man’s vehicle, three birds had already died of exhaustion. The cost of one falcon reaches $50,000 on the international market.

The illegal smuggling of rare animals and plants registered in the Red Book of Endangered Species follows the trafficking of drugs from the point of view of immense profit.