Russian McDonald’s restaurants are less dangerous than American ones

Danish researchers found that higher doses of trans fats content in US fast-food chains' products than their counterparts in other countries. They published their data in New England Journal of Medicine. 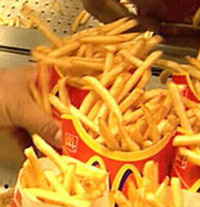 Russian McDonald’s restaurants are less dangerous than American ones

Researchers tested products from the chains' outlets in dozens of countries in 2004 and 2005, analyzing McDonald's chicken nuggets, KFC hot wings, and the two chains' fried potatoes. For example, they found a large fries-and-chicken-nuggets combo at a New York City McDonald's contains 10.2 grams of the trans fat, as compared to 0.33 grams in Denmark and about 3 grams in Spain, Russia and the Czech Republic, according to the AP.

Trans fat raises bad cholesterol and lowers good cholesterol. Eating just 5 grams of it per day increases the risk of heart disease 25 percent, research shows. Switching to liquid vegetable oils such as canola, corn, olive or soy eliminates the trans fat, as has been done in Denmark under a 2004 law allowing only a minuscule amount of trans fat in foods. Experts said many U.S. restaurants still use partially hydrogenated vegetable oil to save money because it does not spoil and can be used over and over for frying, xinhuanet.com reports.

"McDonald's takes the matter of trans fatty acids seriously," the statement reads. "In fact, it is important to note that this Letter to the Editor itself draws heavily from information provided by McDonald's web site - a clear example of our commitment to transparency on this issue."

McDonald‘s Corp., which promised in September 2002 to cut trans fat in half, and KFC parent Yum! Brands Inc. said the explanation is local taste preferences. But nutrition experts and consumer activists said it is about money: Frying oil high in trans fats costs less, localnewsleader.com says.

The US Food and Drug Administration this year began requiring food makers to list trans fat levels on their labels. In February, McDonald's announced that it had understated the amount of fat and calories in its french fries. It had originally said its large serving of fries had 6 grams of trans fat. The company said the correct number was now 8, nzherald.co.nz reports.