Russian girl Olesya Savchenko is ready to convert to Islam for the sake of her beloved and become his second wife in the harem. 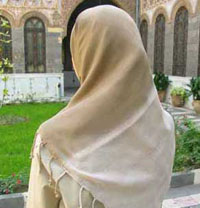 The girl met the young man by chance in a cafe where she was having lunch together with her institute class-mates. A group of young men was sitting next to the girls. Among them, Olesya saw a tall dark-eyed man who incredibly impressed the girl. When the men wanted to get acquainted with the girls, the latter turned the offer to get acquainted down. Although Olesya liked the tall man she did not dare to object to her friends’ decision. All the nights long after the accidental meeting at the café, the girl was crying as she felt the man was the one she had been dreaming about so long.

Olesya regularly came to the café for the next three months hoping to meet the man but all in vain. One day when the girl already despaired of meeting the man she liked she suddenly came across him in a park. This time the girl was more resolute; she came up to the young man and said she wanted to get acquainted. Olesya was happy to know that Rustam, that was the young man’s name, also liked her and welcomed the acquaintance.

The new romantic relationship made Olesya incredibly happy: she felt like a princess adored by her prince who showered her with excellent presents. But Olesya’s mother strongly objected to this relationship as she did not like Rustam because of his nationality, he was a Kabardinian. But contrary to the mother’s opinion, the girl decided to rent an apartment where she could live together with Rustam. The beginning of their cohabitation was serene but soon the man began to spend evenings somewhere out of home. Olesya wanted to find out where exactly Rustam spent evenings.

She was shocked when she forced a distressing confession from Rustam. It turned out that the man was married and had two children who were living separately in a small town of Baksan in the republic of Kabardino-Balkaria. The confession was a severe blow for Olesya and she turned her beloved out. But later the girl realized she could no longer live without Rustam. She did not get out of bed for two days as she was reluctant to have meals or attend lectures at the institute. Olesya’s friends did their best to encourage the girl to recommence studies at the institute. In a week, Rustam appeared in the apartment where she used to live together with Olesya. He presented the girl with a bunch of roses and explained the confession had been difficult for him as well. The man said he had planned long ago to confess that he already had a family but he terribly feared that Olesya would leave him because of it. He also explained that he loved both, Olesya and his wife and could not prefer any of the two. Suddenly, Rustam asked if Olesya would like to become his wife, his second wife. It turned out that the man already told his parents and his first wife about the intention to make a proposal to Olesya, and he said all of them approved of the decision.

It took Olesya two weeks to finally decide if she would like to become a second wife in Rustam’s ‘harem’. She agreed as she was ready to do anything for the sake of love. Olesya realized perfectly well that she would not tell her mother about the unusual marriage and keep it always secret until her mother understands and forgives her. Rustam’s parents welcome Olesya in the family; the girl often visits her man’s family and even has got acquainted with his first wife and his children.

Olesya and Rustam will marry in several months after the girl graduates from the institute and adopts Islam. She insists that she would on no occasion change her mind.