A Russian woman opens her home to tens of stray dogs

Sixty-four dogs, dozens of cats and even guinea pigs, hamsters and rats have been found at the home of a Russian lady in Belgograd. 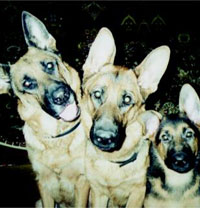 A Russian woman opens her home to tens of stray dogs

Ludmila Lysenko from her childhood days has always looked after stray animals. However, her dedication to her four-legged friends interfered with her work. She started to fulfill her dream once she had been sacked. Ludmila decided not to work any more, but to set up a refuge for stray animals, in her home in the centre of Belgograd.

Rumours of the refuge for stray cats and dogs have been going around the city for five years. Now good-natured townspeople and even veterinarians and emergency services are bringing stray animals from all over the town to the lady’s house. Ludmila says that “every dog and cat has a history, but all have a sad ending to their lives. The majority of puppies and kittens have also their own fill of sorrow.”

Lysenko keeps on adding to her family. Whoever finds her and brings an animal to her is in effect saving an animal from dying of starvation or torture. All the animals in her house get on well with one another and Ludmila puts this down to the traumas that they have suffered.

She manages to feed the animals by selling some of the puppies and kittens. The demand for guinea pigs, hamsters and rats is very high. The money made from these sales is used to help sickly and old animals for whom it is much harder to find a home. Friends also help her to feed the little animals. Ludmila says that she prepares fifty litres of porridge a day.

Local vets give her the most help with the animals. They treat and operate on the animals free of charge. Ludmila has given many animals a second chance in life thanks to the help of the vets. A dog that had been hit by a car was once brought to her. The dog was in a pitiable state and a vet responded to Ludmila’s call and came to her house and operated it. The happy dog is now a guard dog for a house on the outskirts of town next where an important businessman lives.

Ludmila takes the animals out at night time so that they do not disturb anyone. She says, “I go out at night with my son and daughter and we each take five to ten dogs and go to a nearby wood. There they run around and so in daytime they are tired and sit in dark rooms.”

She and her children are proud of the fact that in contrast to other shelters, they do not put to sleep even hopeless animals. Every animal dies a natural death. Lysenko hopes that sometime in the future she may have a proper shelter for the animals, which children can visit and begin to love animals. She does not wish to receive any prizes for looking after the dogs which sooner or later grow old and frequently end up on the street.