The interest to the werewolf phenomenon will never fade away

A werewolf is one of the central figures of the oldest superstitions. This monster featured in numerous Hollywood blockbusters has been terrifying children and adults worldwide for thousands of years as well as vampires, witches, mermaids, ghosts and sorcerers. Werewolf is also known by the name ‘lycanthrope’ meaning “a wolf human” and originating from the Greek word Likantropia. Some dictionaries define the word as ‘turning a witch into a wolf”. 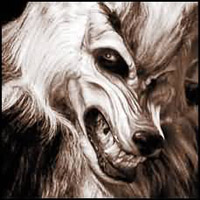 The interest to the werewolf phenomenon will never fade away

The werewolf theme was always popular in the folklore worldwide, and each country has its name for the creature. Beginning from the epoch of Romulus and Remus, stories about wolves and werewolves excited the imagination of such prominent figures as Jean-Jack Rousseau, Carolus Linnaeus and Jonathan Swift. The talented writers composed an entire series of wonderful stories about werewolves.

However, the werewolf is little known as compared with his fellow, the vampire. The werewolf is more multiform and more mysterious than the vampire. The modern science may easily discredit all the mythical characteristics given to the vampire. But it is known that in old times some strange disease really affected entire settlements and turned people living there into furious beasts. Those diseased revealed all the classical symptoms of lycanthropy.

The interest to the werewolf issue seems to be inexhaustible. In the 20th century, filmmakers were inspired with the issue for making a great number of films about werewolves. Today, fiction and journalism reveal even a deeper approach to the werewolf issue and consider it in a wider aspect.

December 17, 1976 London’s The Daily Mail published a story entitled ‘Werewolf Killer Caught, The Police Say’ that told about the seizure of a criminal known as the Paris werewolf for committing numerous killings. At the end of WWII, Nazis founded a terrorist organization code named Werwolf (Werewolf). Criminals are often described with the strong moral metaphor ‘werewolves’ when they commit really wild series killings, violations that are beyond logic; when they practice cannibalism, tortures, sadomasochism and Satanism. The irony of the metaphor means that the wolf never attacks and kills itself unless it is hungry or wounded. According to recent researches, wolves in a pack maintain close trusting relations where the entire pack is based upon mutual responsibility. And in case some of the wolves in a pack reveals the killer instinct they liquidate it for the welfare of the rest of the pack.

Genuine werewolves in the contemporary society are those who come to mental hospitals as patients and participate in ritual ceremonies of American Indians. Doctors call people of both sexes who imagine or feel they are werewolves ‘lycanthropes’. So, today the word ‘lycanthrope’ is a professional medical term indicating a pathological condition; and the word ‘werewolf’ is a word used in fiction, films and as a characteristic of criminals.

Werewolves and their terrible doings were known already in the time when Rome was being founded. People in Ancient Greece also feared the scary creature. But werewolves as well as vampires were particularly scary for people in Eastern Europe where the only mentioning of a werewolf made peasants turn white and look around numb with fear.

Unlike vampires that got out from their coffins to suck blood out of living people, werewolves do not belong to the other world. The werewolf is an absolutely earthly phenomenon. It is highly likely that the turning of humans into wolves was connected with some disease, and anyone could be affected with the disease. It was for sure that a werewolf bite would make a victim diseased. But nobody knew when and under what conditions the terrible werewolf symptoms could reveal themselves. And this fact explained the wild fear and mass executions in the Middle Ages when people suspected of being werewolves were burnt or executed with swords. When the mass fear sweepingly spread, people known as batty or those having something wolfish in their features could be immediately prosecuted as werewolves.

People suspected of lycanthropy found themselves in a really terrible situation. Such attacks as a rule entailed a huge range of moral and religious problemsin theepoch when the church played a really important role in the everyday life of all people.

The tradition of that time was to start open legal proceedings with tortures against those declared werewolves, and then the latter were executed which was usually burning. It is not known exactly how many people were executed by hanging or burning on the charges of lycanthropy. However, ancient written evidence proves that the number was quite considerable indeed.

People particularly feared the full moon as it was believed that the disease affected people particularly at this time. Those affected with the disease found their bodies awfully changed, they looked and behaved very much like wolves. After the terrible transformations, werewolves set off for their night wandering to kill anyone they met. That was a real disaster indeed. A human can turn into a vampire only after an attack and bite of another vampire. But lycanthropy was the disease that could suddenly affect anyone, and there was no salvation from it.

There was little chance that patients suffering from lycanthropy could be cured. As a rule, werewolves were doomed to their every night wandering until some other stronger creature killed them or they were not shot with a silver bullet. Unlike vampires, werewolves could be killed in very traditional ways, but it was believed that especially cast silver bullets were particularly effective against werewolves. It was until the 18th century that people in some parts of Europe believed that werewolves had their haired wolf tails hidden under clothes even when they turned into humans again. People thought that the physical peculiarity was always typical of lycanthropy patients, and doctors stated they actually saw patients having tails. That was true that doctors could offer no medicine to cure the disease.

Ancient treatises say that true lycanthropes not only physically turned into wolves, their mind and behavior also changed at that. Such people sensed they were absolute beasts. Those documents stated that meeting a lycanthrope was also risky on a sunny day, but moonlit nights of the full moon were particularly dangerous. It took just a very short period of time for lycanthropy patients to begin to transform into wolves. They felt fever and thirst, then their hands and legs turned into legs resembling those of a wolf. People threw off their shoes as their feet turned into wolf’s paws. The mind of a lycanthropy patient also absolutely changed, and it could no longer stay indoors. Then nausea and spasms entailed madness when the transformation became perfectly evident: a patient threw his clothes off, his body began to cover with hair and the feet grew coarse. Soon, all of the head was covered with thick hair and it seemed a human was wearing an animal mask. Then a lycanthrope was gripped with the blood lust and it ran away in search of a victim. Like many beasts of prey, lycanthropes killed their victims by biting their cervical arteries. When the blood lust was satisfied, a lycanthrope fell asleep right in the forest where he killed his victim. At daybreak, a lycanthrope turned into a human again.

Lycanthrope always felt when the terrible transformations began, but they usually occurred within a very short period of time. So, people suffering from the awful disease had to take special measures not to be exposed. Lycanthropes having big houses had special secret rooms where they hid until they turned into humans again. Others preferred to escape to forests where they were growling and rolling about the surface.

Philosophers and scholars in all epochs disputed whether werewolves actually existed or were just a fiction. Many of outstanding scholars supposed that in case of some mental diseases patients could feel they are beasts, but they emphasized that real lycanthropes could not exist at all.

In 125 B.C., Roman poet Marcell Sidet wrote that people affected with lycanthropy revealed mania, frightful appetites and wolf ferocity. According to the poet, people were particularly subject to the disease at the beginning of a year, in February, when the disease was widespread and revealed in acute forms.