There is no way one can measure popularity of an athlete by counting his titles or medals. A public-opinion poll is probably a good way of rating the public adulation. Researchers at Romir Monitoring asked 1,600 respondents with a view to find out the most popular athlete in today’s Russia. 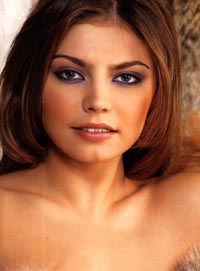 Respondents were asked to check off several names at a time. The results of a nationwide vote showed that the modern rhythmic gymnastics star Alina Kabaeva enjoyed the largest share of popularity. She received 22% of the votes. The figure skater Irina Slutskaya was a runner-up with 20% of the votes. The tennis star Maria Sharapova took the third place by getting 15% of the votes.

It is funny that the polled showed little interest in the athletic achievements of Russia's remarkable girls. By the bye, Alina Kabaeva has not yet won any major tournament after she came back to gymnastics following a lengthy break. Ira Slutskaya scored only a bronze at the latest Winter Olympics in Turin. Masha Sharapova’s performance still does not look up to par these days. Lately she has decided to skip Russia’s forthcoming Fed Cup tie against Belgium. The funniest thing is that Anna Kournikova got the fourth place (12% of the votes) in the survey. Kournikova had quit tennis a long time ago.

Respondents aged from 18 to 24 secured Kabaeva’s victory, they voted for her almost unanimously.

In the meantime, the Muscovites voted quite differently. The Moscow residents chose Irina Slutskaya as their sports queen. The famous figure skater received 35% of the votes cast in Moscow. The skier Yulia Chepalova took the second place with 12% of the votes. The biathlete Albina Akhatova finished third with 10% of the votes. All of the above are the heroines of the Turin Games. Looks like the Muscovites treat the latest achievements of our athletes more seriously than other participants of the survey do.

As regards Maria Sharapova who climbed the top of the Moscow list last year, she was ranked No 8 this time. The following athletes left her behind in terms of popularity with the Muscovites: Tatyana Nevka (figure skating), Svetlana Ishmuratova (biathlon), Svetlana Zhurova (speed skater), and Olga Pyleva (biathlon).

Evgeny Plushenko, the winner of the 2006 Winter Olympics in figure skating, predictably went right to the top of a similar public-opinion poll held earlier this month. Plushenko managed to win popularity with all residents of Russia including those living in Moscow.