Maria Sharapova, who did not celebrate any significant victories in sports last year, continues to live on the wave of her triumph in Wimbledon. Forbes magazine, which has a great passion for counting other people’s money, has recently published another rating of athletes who earned most in 2005. It goes without saying that the journalists of the magazine could not leave Russia's biggest tennis star aside, who signed several highly lucrative contracts after her triumphant season in 2004. 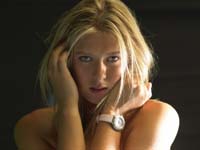 Having evaluated the income of the world's richest athletes, Forbes put Sharapova on the 21st position on the list. Last year Maria Sharapova earned “only” $18.2 million. This is not a lot in comparison with Michael Schumacher’s $60 million, or Tiger Woods’ $87 million.

One can probably say that Maria Sharapova will take a higher position on Forbes’ next sports rating taking into consideration the fact that the Russian tennis player has not even turned 20 yet. In addition, Sharapova has been quite successful on the tennis court lately. The girl from Siberia will probably make it to the top ten of world's richest athletes next time.

Another world-famous magazine, FHM, which is fond of making a diversity of women’s ratings, highly evaluated Maria’s advantages. This time around, FHM journalists selected the sexiest women in the world and included Sharapova in the top ten list. The Russian girl has quite an impressive company: Angelina Jolie, Jessica Alba, Jessica Simpson, Keira Knightley, Halle Berry, Jenny McCarthy, Carmen Electra and Teri Hatcher. Scarlett Johansson was put on the top position of FHM’s list.

Maria can probably conquer such ratings in the future as well. Sharapova has recently unveiled her new Nike sports gear. The tennis star presented a special black-and-white corset and a black skirt made on the new Dri-FIT technology. Sharapova has won quite a number of tennis matches and is set to play Anastasia Myskina.

Needless to say that the commercial success is extremely important for all athletes. However, they also need to take care of their own popularity among their fans. Sharapova was considered Russia’s most popular athlete, although she has lost this status now. The champion of Wimbledon 2004 ranks only third after skater Irina Slutskaya and rhythmic gymnast Alina Kabayeva.

If Maria wants to retrieve her erstwhile popularity in Russia, she will have to gain another big victory. If Sharapova does not win any other tournaments, everyone will forget about her. On the other hand, Maria Sharapova can finish her career in sports and start another one in fashion business like Anna Kournikova (pictures) did.