It takes just five seconds for Alexey Ukolov from the Russian city of Vologda to remember and reconstruct in any sequence a matrix of 25 symbols; the man needs less than a second to sum up eight-digit numbers. It is known that nothing of the kind has ever been registered in the Guinness Book of World Records. 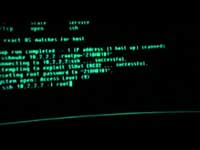 Alexey persistently exercised his memory for a rather long period of time. He can memorize and wonderfully reconstruct any chaotic selection of numbers and objects just in several seconds. The long years of exercises made Alexey’s memory about perfect.

Alexey Ukolov has proved several times already that he deserves registration in the Guinness Book of World Records. He fixed the eyes on a matrix of 25 numbers from 0 to 9 arranged five numbers in every horizontal and vertical line just for six seconds. And then he correctly named all the numbers located in every horizontal, vertical and diagonal line. Those who observed the experiment fixed no mistakes. However, Alexey says that some time ago it took him just four seconds to remember and reconstruct numbers. He says he has had little exercise lately.

It took the man seven seconds to remember a line of 27 numbers, and then he phenomenally reconstructed the numbers in the given and inverted order. Alexey thinks that he has achieved wonderful success in summing up and deduction of eight-digit numbers. “Multiplication, finding a root and raising to the power comply with the system and thus can be done by any of us. But addition and deduction of eight-digit numbers mentally is a really hard task to be done by anyone,” Alexey says.

Alexey’s wonderful adding and deduction of eight-digit numbers stunned witnesses of the experiment. He precisely calculated results of all the operations mentally immediately after the last figure was announced. Alexey confesses that the hardest thing for him to be done is to reconstruct a line of 86 randomly placed objects. He says that one of the main conditions for him in this case is that the objects must be paired. Alexey’s first attempt in the experiment was a failure. He says that once he could remember and reproduce a succession of about 100 items.

The world record breaker Roman Campajo from Spain is known for his wonderful photographic memory. He registered the first record at the age of 18 when remembered 23,200 words. Within 72 hours experimenters dictated the words to the young man, and then asked which word was pronounced under some particular sequence number. The record breaker explained that he managed to remember so many words thanks to connotation; it was the connotation of every word that helped him remember 23,200 words. However, Alexey’s abilities are more unique than the talent of the Spanish record breaker. Indeed, it turns out to be harder to remember and reconstruct large matrixes and to calculate addition and deduction of eight-digit numbers.

Another Russian man, Evgeny Ivanikhin turned out to be a real sensation. The man was disabled after a spine injury at the age of 12. He revealed an astonishing photographic memory. It seemed that Evgeny knew all possible sciences and could solve really complex scientific problems in an instant. For instance, he helped his father solve the problem of a bridge construction which the latter had been tackling with colleagues for several months. Evgeny’s phenomenon was an international one, and some researchers believed it was somehow connected with extraterrestrial forces.

Now, Alexey Ukolov from Vologda says he is ready to undergo a trial to be included into the Guinness Book of World Records. He adds that in case Guinness Book inspectors agree to conduct an experiment on him he would remember and reconstruct the order of one hundred of tricolors of Russia or some other country that inspectors indicate.