A South African has decided to return to Egypt an amulet stolen in Tutankhamun's tomb to get rid of "pharaoh's curse". In a letter to the Egyptian Minister of Culture she gives a long list of misfortunes which happened to owners of the scarab-like amulet that was stolen from the pharaoh's burial place by an Egyptian labourer who worked on archeological dig in 1922. The tomb in the Valley of the Kings near Luxor was discovered by British archeologist Howard Carter. 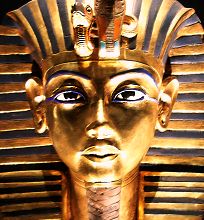 The first unfortunate owner, a British seaman who bought the amulet in Cairo, drowned in a shipwreck. His daughter died of leukaemia at the age of 21. The widow decided to get rid of the figurine and presented it to the father of the current proprietress, whose daughter also died of leukaemia at age 21 and whose husband suddenly died before the amulet was sold.

As a result, according to what the Deputy Minister of Culture Sheriff ash-Shobashi told reporters in Cairo, the proprietress decided to give the amulet back to Egypt to let be be placed in King Tut' tomb again - the pharaoh of the 18-th dynasty (ruled in 1361-1352 B.C.) who died at an early age.

This January a group of Egyptian scientists made more than a thousand pictures of the pharaoh's mummy by means of a computer tomograph to determine circumstances of Tutankhamun's death. The expert report will be promulgated in March, RIA Novosti reports.