Abramovich moves into the world of fashion

Not many people have as many strings to their bow as Roman Abramovich. Besides football, the governor of Chukhotka has an interest in Russian fashion and is even prepared to take part in some fashion shows. It is known that the oligarch wants to set up a fashion show in London of one of his favorite designers, Denis Simachev who was in 2004 named one of the most influential young men in Russia . 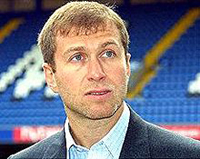 Abramovich moves into the world of fashion

Abromovich and his wife Irina are known to be admirers of the designer and happily wear his clothes. The two men met one another in Moscow through general acquaintances and Abromovich then decided to organize a professional fashion show in London which will take place at Stamford Bridge, home of Chelsea Football Club. The Autumn-Winter collection will be shown at the event.

The show will be an invitation only event. Organizers hope that London celebrities and Chelsea ’s leading footballers will come to see the fashion show.

The Russian version of Vogue, one of the most successful fashion magazines, is helping to organize the event. The chief editor of the magazine Aliona Doletskaya, who has already received an invitation to the show, says that Simachev is one of the most successful Russian designers. “He is fairly controversial and at the same time ironic since in his designs he examines the Soviet symbol in a new way,” Deletskaya said of Simachev’s work.

As a sign that Abromovich sponsors Simachev, in his new collection there is a t-shirt with a picture of Abramovich on it and the slogan, “My happiness depends on your success.” The t-shirt costs £112. A t-shirt which has the Chelsea colours on costs £120.

Denis Simachev’s first collection appeared in Moscow in Spring 2001. The collection, in which he used the Soviet symbol and other Russian national motifs, brought the designer much popularity.