Russian men cannot watch gay love scenes in Brokeback Mountain. The widely recognized and critically acclaimed film, which opened in Russian theaters on March 16, receives quite mixed reactions with Russian audiences, especially with men. Many men cannot watch the love scenes in the film and leave, Novy Region reports. When the film ends, one can hardly see any men in the cinema, although the hot scenes do not disgust women. 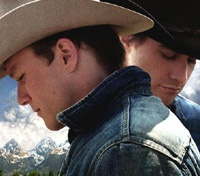 Employees of Russian cinemas do not say that Brokeback Mountain attracts fewer viewers than other films do. Many men come to see this film, including men of untraditional sexual orientation. The latter usually watch the entire film from beginning to end. The issue of homosexual love that the film explores does not attract the Russian people: they mainly come to see Brokeback Mountain because of the publicity that the film has received in the world.

“Many people come to see the music shows of Boris Moiseyev (a notorious Russian homosexual artist), but it does not mean that all of them are gay. Many are interested in Moiseyev as an artist,” a cinema manager Olga Shepeleva said. “Many men come to see this film with their wives or girlfriends. This is probably why some of them do not leave and keep on watching,” she added.

Directed by Ang Lee, the film has met with modest box office success and garnered significant critical acclaim. It has picked up prizes from the Venice International Film Festival, Critics's Choice Awards, American Film Institute and the Golden Globes, among others. Not surprisingly, it was nominated for eight Academy Awards, including Best Picture; but it walked away with only three Oscars -- Best Original Score, Best Director, and Best Adapted Screenplay.

Although the film deals with universal themes of love and loss, it is the homosexual relationship at the heart of the story that has the media and Hollywood gushing their praises. Brokeback Mountain centers on two young cowboys in 1963, Ennis Del Mar (Heath Ledger) and Jack Twist (Jake Gyllenhaal), who spend the summer sheepherding on Brokeback Mountain. They "fall in love," engage in sex, and part ways.

Brokeback has resonance outside of the gay community precisely because its theme is universal. Beyond a tale of love and loss, it's the story of two people whose relationship is thwarted by circumstance. Shakespeare knew this was a good one when he wrote Romeo and Juliet in 1596. James Cameron used it as the framework for his otherwise clumsy Titanic, arguably the most recent instance previous to Brokeback whereby people developed a heroin-like addiction to cinematic tragedy on a mass-market scale.

It is worthy of note that Turkey's Culture Ministry has restricted the viewing of the Oscar-winning gay romance "Brokeback Mountain" to viewers over the age of 18, saying that the movie violated public morals, a ministry official said Thursday. The restriction reflects the sensitivities in overwhelmingly Muslim Turkey, where homosexuality is largely a taboo subject, the AP says.