Scientists are still in disagreement over the origins of Tarot cards. Some claim that Tarot was devised by ancient Egyptians. Another group of scientists point at Gypsies while others maintain that Tarot was a product of the medieval order of Templars, which borrowed it from a mystic sect based in Syria at the time. After returning to Europe, the members of the order disguised the magic cards as toys to avoid persecution. 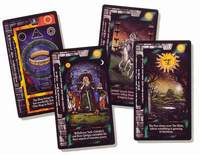 “The images of Tarot mirror its symbolism, those images made it possible to preserve the secrecy of knowledge,” says Irina Krutitskaya, a historian of arts and owner of a magic salon. “In essence, Taro is a system of concepts about the hidden rules controlling the Universe and every person’s life,” says Krutitskaya.

With a few exceptions, Tarot packs contain 78 cards – the Major Arcana (22 cards) and the Minor Arcana (56 cards). The 22 cards of the Major Arcana are unique to Tarot. Their symbolic images are often beautiful and colorful, and lie at the very heart of Tarot. The powerful archetypes illustrated on these cards are recognizable in most cultures. They include the Fool, the seeker after truth; the Emperor, the figure of male authority; and the Moon, symbolic of both intuition and deception. The Fool is the only Major Arcana card to appear in the ordinary pack of playing cards, as the Joker.

The inquirer himself shuffles the cards and cuts them into three piles. Then he puts the piles back together, and deal off the cards to be used in the reading,” says Krutitskaya. “He is willing to see things that will happen to his life so he becomes part of a guided cosmic process. His spirit hooks up to the process while his desires are being filled with fluids slipping off his fingertips. The spreading of the cards in a particular pattern of interrelations marks the knowledge, which the inquirer possesses at subconscious level. It is the subconscious that makes his hands move. The inquirer should keep up the original impetus of a moving hand,” says Krutitskaya.

“Assuming that he already has information, why should he resort to the cards?”

“We do not know about every thing that happens inside our mind. We hold all the mysteries relating to us but they are hidden deep down below our consciousness. Tarot cards turn into a key for opening the doors of Self.”

Those who used the services of a gypsy fortune-teller are likely to recall a weird sensation of being influenced by some strange powers. It felt as though the fortune teller had used the words to keep you mesmerized. What was that? The power of hypnosis?

Krutitskaya has no doubts that the unknown takes control during those incidents. “Your interest stems not only from the desire to know what’s in store for you, it’s caused in part by the need of your consciousness to get information kept in your subconscious. If your imagination flows, your interpretation should be accurate because it will be guided by your intuition. “I would like to remind you once again that Tarot cards and, to some extent, plain gypsy cards are connected to the Cosmic Thought-form of a person’s information and energy field with all its interrelations, which predetermine the future of a person. Information is imprinted in time (the past, the present, and the future). It is the principle used by clairvoyants e.g. Vanga when they do a bit of a fortune-telling. The cards become a clairvoyance tool if you use them. It is very important that you read the symbols and their interrelations as shown in a spread. A good deal depends on the knowledge and abilities of a cards reader in this case.”