It is an open secret that the birth of a baby changes both the inner and the outer world of a woman, her lifestyle and attitude. It seems that this is exactly what happened to US pop princess Britney Spears. Britney gave up her music career after the birth of her son, Preston,  and entirely devoted herself to the offspring. Apparently, the singer, 24, has developed an immense passion for motherhood and decided to have another baby. 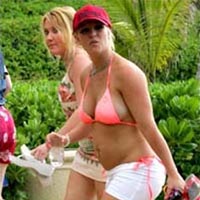 It has been rumoured that Britney Spears is pregnant again. British tabloids have recently published a revealing photo of the singer. One could see that the young mother was growing a belly. The photo was taken during the singer’s stay on Hawaii.

It is worthy of note that Britney earlier announced her intention to get back to the studio and make a new album this year. However, the plans have been changed. Sources close to the singer’s assistants said that all meetings and arrangements scheduled for Britney’s return in the music business have been canceled.

The rumours of the pop star’s pregnancy appeared a couple of months ago. Shoppers in one of trade centers in Malibu had an opportunity to take a look at the singer’s bump. “Yes, it is true! Number two!” said Britney when people staring at her belly made her lose temper. Was she joking or was she not?